04.20.2014
Translated by Olga Ruda and edited by Voices of Ukraine
Source: http://www.sever.lg.ua/2014-04-22-ukrainskogo-muzykanta-iz-rubezhnogo-kotorogo-privyazyvali-k-derevu-mogut-eshche-i-posadit 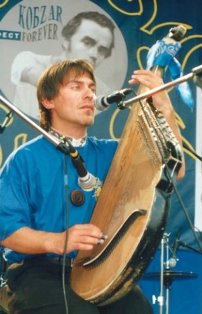 He is being charged under Section 2 of Article 263 of the Criminal Code: “carrying, manufacturing, repairing, or selling of daggers, bowie knives, knuckledusters, or other side arms, without a legally required permit.” The possible penalty ranges from a fine of up to 50 non-taxable minimum incomes (UAH 850, or equivalent to about US $70) or restriction of liberty for a term of two to five years.

On April 21, Vasyl, who originally hails from Cherkasy oblast but has been living in Rubizhne for the past five years, went to a pro-Ukrainian rally with his family (wife Maryna and father-in-law), where he was attacked by pro-Russian activists.
Wife Maryna and her father managed to escape from the raging crowd. But Vasyl was captured.

A video titled Detention of Provocateur was posted on YouTube, which shows Vasyl being tied to a tree.
At first, the captors are seen carefully studying his business cards holder. By all looks, they are probably searching for Yarosh’s business card, but can’t find it. Yet, they still go on to say that Vasyl is an armed Right Sector “fag.” That’s because they allegedly found a knife while searching him at the tree.

Vasyl tried saying that he’s been living here for the past five years, but no one heard him. Police then arrived to the scene, taking Vasyl away.

His wife Maryna says that the knife was planted on her husband. After all, it wasn’t the police who searched him.
“We were going to a peaceful rally. Vasyl never had any knives on him. I’m at the police station now, waiting to meet with the investigator. My husband is still in custody”, said Maryna.

Reference Note: Zhyvosyl Liutyi is a well-known musician and a regular performer at concerts and folk festivals. He is the author of more than 300 musical pieces, including scores for popular-science films, and the medalist or winner at more than 40 different music festivals, including Chervona Ruta and Pearls of the Season. He has recorded five albums in different musical styles. He considers the popularization of Ukrainian folk music to be his main mission.

The Kobzar  community (musicians who play the kobza or the bandura) has issued the following statement:

“The Kobzar community of Ukraine is deeply worried about the fate of one of their brothers, the Kobzar and community activist Vasyl Liutyi. He was the emcee/leader of the rally for united Ukraine in the town of Rubizhne in Luhansk oblast, in eastern Ukraine.

“We have learned that on April 21, during a rally in support of a united Ukraine in the town of Rubizhne, Liutyi was severely beaten and then arrested. During his arrest, he was tortured. We condemn the excesses of Russian chauvinists and protest against the inaction of the law enforcement authorities. We demand the immediate release of the composer and Kobzar Vasyl Liutyi.

NOTE: A Kobzar is a player of the kobza or now, more commonly, the bandura, a multi-string Ukrainian national instrument. They have a centuries-long history within Ukrainian culture as itinerant bards who preserved oral history and culture through their songs. They were killed en masse by Stalin’s orders in the 1930s, but in recent years, there has been a revival of the Kobzar tradition.