Postcards from Maidan is an art initiative that helps facilitate the psychological rehabilitation and physical recovery of patients. Artists visit the wounded and use drawings as a storytelling mechanism of Maidan. The wounded are later presented with the drawings. This is the story of one Maidan protester. In this case, the artist is a photographer. This is story # 23. 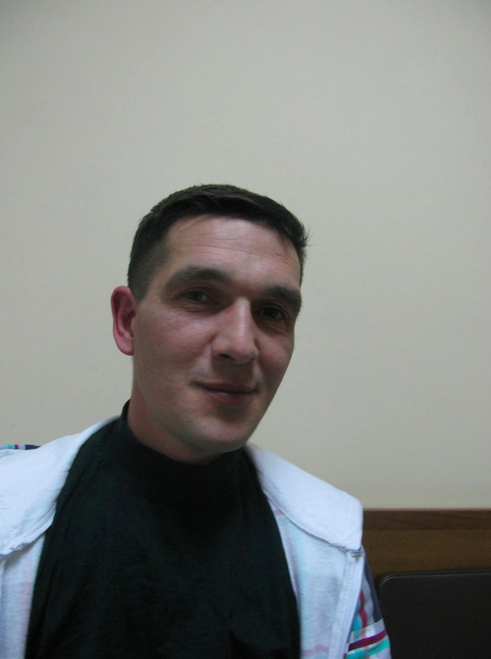 “I was on Maidan as of December 4, 2013. I saw everything that happened there – picket lines, the bloody meatgrinder. The question arises: was it worth doing this? Innocent people died. I got wounded on the morning of February 19, 2014. I had three in the neck, and three in the hand – not bullets, but pellets.

On February 21, they took them out. Or rather, I took them out, by the Trade Unions House. When they wounded me, I just fell. People told me later that I had been indignant. Whether they had the right, or not – does not make any difference. I was lying there wounded next to murdered people. Lead pellets, they even had “AKs.” From the October Palace everything was visible – they shot to kill. Someone lowered their shield down for a minute – and that was it, the helmet few off.

It all started on January 19. And exactly a month later, again. You wanted to go to Europe? Now it has reached Crimea.

I speak Russian, I’m from Sumy. I would love to go to Lviv, very much so. Their language… I got embarrassed when I heard the guy from Ivano-Frankivsk talking to a man from Lviv. [They talked] so beautifully, you could never say it like that in Russian. And in Crimea, they went too far …

I came to Maidan myself. I was initially at the Kyiv City State Administration. When the guys ran from Lyuteranska Street to make a “chain,” the Berkut [riot police] were there. It was the first defeat. December 13-14. I heard so myself, when a Berkut policeman said, “Guys, leave, you will be attacked.”

I had all of my things there, at the Kyiv City State Administration. I had a place to go at night. I went to the October [Palace], there were guys from Odesa there, it turned out they were from the “Svoboda” faction. I stayed with them until February 16. And then I left and went to the Self-Defense. Before, I wore civilian clothes, and received hits to my head repeatedly. The Self-Defense dressed me properly: I received a bullet-proof vest.

On Hrushevskiy Street, when the stampede began, I said, “Guys, whomever owes me – I forgive everyone.” That’s how I was, joking around, but what else could I do? When I feel bad – I dance.

I got lucky: found a box with “stinkies” – bottles with ammonia. I came to our guys and say to them, “Guys, [Molotov] cocktails – are so last century.”

I was on Maidan until February 21. I came over, and had my bandages changed. Then, they gave me painkillers. Then, the complications started. Out of interest, I went to the “Ukraine” Hotel, to see what was happening there. There was a clinic there. They helped me.

I don’t have any documents, nothing in hell. Everything got burned down. What a beautiful coat I had.

I do love life.

Cruel times – cruel people. Only nothing is clear yet, who will win…

Initially, there was no leader. The guys stand on a barricade, and the armored vehicle is driving by.

[People in the vehicle] ask them:

And they keep standing there. What now?”

Artist Myroslav Vayda talked to Vitaly at Kyiv city clinical hospital #12. Myroslav is currently working on a project that will focus on the history of Vitaly’s story.