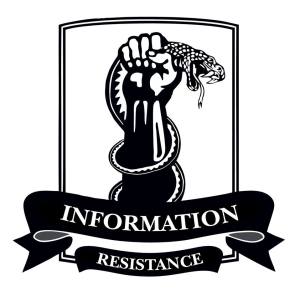 Today his “straight line” – is a protocol of feverish delirium. Just take his story about eastern Ukraine as “New Russia with roots related to Russia” as an example.

And his story that the Russian military in easterm Ukraine is nothing but “nonsense?” This Kremlin storyteller likewise prophesized while foaming at the mouth in March that there were no Russian troops in Crimea. And then it turned out that there were 22,000 of them there. And today Putin admits himself: yes, Russian soldiers were behind the local Crimean “self-defense.”

Question: who continues to believe this utterly deceitful creature? No one in the world. And yet, sitting around in front of their TVs loyalist Russians nod obediently: the Tsar speaks the truth. One doesn’t know whether to laugh or cry.

2.  Extremist acts continue in eastern Ukraine. There is unrest in Stakhanov [Luhansk Oblast] – which by the way, is the homeland of Yuriy Karyn, one of our IR [Information Resistance] coordinators. Pro-Russian mongrels are going berserk in Donetsk.

However, the situation is uneasy in other regions, as well. Today, the representatives of local authorities in Zaporizhya oblast [region] spoke about possible extremist activity.

We have our own information about this. According to our data, airplanes with “Putin’s tourists” on board landed at the Saky airfield in Crimea. They were loaded into vans with Zaporizhya plates. Nothing good can come from this.

1. Following the meeting of Ukraine-EU-US-Russia [in talks in Geneva today], a number of agreements were reached. In particular, the release of captured buildings in Ukraine and amnesty for extremists. It sounds like it was on the level of appealing to both “sides” of the conflict.

The problem is, how much one is able to trust Russia. After all, they [Russia] still refuse to admit that all this chaos happenning is their fault. And therefore, all of their announcements are empty phrases. However, even if Moscow recognized its role [in the conflict], no one would begin to believe in its good intentions anyway.

This is why it’s still a big question as to what role these agreements might play. Personally, I am skeptical about them: I think Moscow participates in these negotiations to avoid new sanctions by the West, but in practice will continue its black business. But let’s wait and see. At least, there is some sort of communication/dialogue on the international level.

One more positive: against this background [of negotiations], at least we shouldn’t expect Russian invasion tomorrow. But it doesn’t mean that it won’t happen, relatively speaking, the day after tomorrow.

2. Somehow the problem of our fellow countrymen who remained in Crimea yet don’t fervently love the occupiers, has unwillingly gone by the wayside. And who want to move to the mainland, but can’t. In general, even earlier, this problem concerned the government only in words. And now they have simply forgotten about these people.

Of course this this not a positive. But it’s positive in the sense that an electorial campaign could make it a plus [positive outcome]. Today, the only presidential candidate Natalia Korolevska (http://en.wikipedia.org/wiki/Natalia_Korolevska ) visited Crimea – and examined problems these families face, right then and there.

We know that her “horse” is social topics. As in what is urgent now. All social guarantees in Crimea are crumpled now, and the interaction between the Ukrainian state and its citizens is absolutely unclear.

But apart from the social, there is also the concern for the elementary physical security of these people. Earlier, Russia had given Crimean residents an ultimatum: they have until April 18 to decide on their citizenship. Nobody knows what will happen to those [people] who have not accepted Russian citizenship.

Since official Kyiv is quiet, politicians should raise such issues in Crimea. The main task here is not to silence them. Indeed, there are specific people behind every problem – our brothers and sisters.

I won’t judge whether it’s a lot or little. But I know that these people are the most active patriots. People who just want to live peacefully in a stable and unified Ukraine – as in hundreds of times more.