Crimean resident: The Truth about Crimea 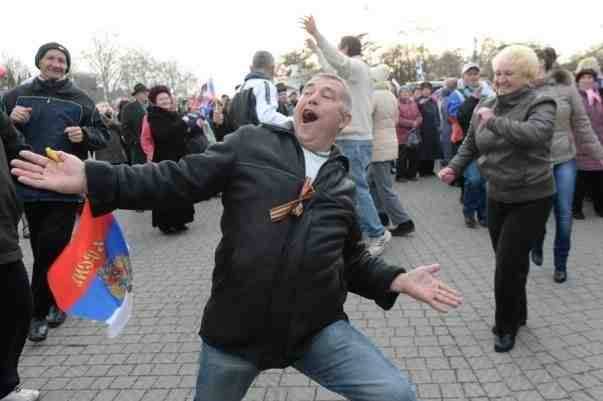 Although this is very difficult for me and my family, I MUST tell the TRUTH, I can’t stay silent any longer!!! My name is Aleksei Fedorov, a Ukrainian citizen. I was born and grew up in Simferopol, I have a wife and two children. My father is Russian, my mother is Ukrainian, although my maternal grandfather is a Crimean Tartar. I have, or rather HAD, my own business, a chain of drug stores in the city. Let me start from the beginning.

When the “little green men” started to take over the peninsula, some people really were euphoric. I even entertained the perfidious thought that Russia would put its petrodollars into the Crimean economy and life would at last sort itself out. But that’s not how it turned out! Already after a few days some incredibly terrible things happened, it’s difficult to describe them, but to see them live is even worse. It’s like a nightmare or a horror film! A family of Crimean Tartars lived in our building, they had come back home at the beginning of the 1990s. The head of the family dared tell a Russian soldier that his armoured car was blocking the parking spaces near our building (it is on the edge of the city, almost as you come into town). The soldier immediately started swearing, then laughing loudly he commanded his comrade to ram the car. The front of his Lada Priora (bought six months ago on credit) was crushed and the Tartar, hardly believing his eyes, only just got out of the car.

In the morning he found the car in an even more lamentable condition. A statement to the traffic police and the police only brought about the reverse effect: late in the evening when he came back from work he was beaten up by a stranger in a military uniform, he was beaten round the head with a butt of a gun and they amused themselves by holding a bayonet to his throat. After this “fun” they let him go with the words: “Listen up, coon, you make any more noise and we’ll kill you and your family.” The result was s concussion, a broken and dislocated arm, fractured ribs and nose, numerous bruises and heavy injuries, he lost a litre of blood and spent two days in hospital. This time the police completely refused to take his statement, it turns out they were working with the occupying forces.

But the worst was still to come, these monsters found out that he had again tried to complain and they figured out where his wife works. She was a chemist in my drugstore three kilometres from my house. On the next day the little green men turned up and insolently demanded a “gift” for the “Russian brothers” (although they were more like Kadirovian Caucasians) 200 packs of expensive antibiotics (e.g. the much sought after Ciprobay, one course costs 4,000 hryvnas), 500 packs of vitamins, a “minimum” of 300 packs of the most expensive steroids and a lot more. They said for “your Self-Defence.” She tried to refuse politely, but they immediately went wild and started a flagrant robbery, breaking windows and stands. She tried to scream but they took her, taped medical plaster on her mouth, threw her into the “Tiger” and took her to their base. There they tormented her and almost raped her. They asked for three thousand dollars ransom for her. The family didn’t have that sort of money, on that same day they sold all their household appliances, part of their furniture for next to nothing, they got rid of everything that they had saved for the rainy day that had now arrived. The next evening they gave the woman back in exchange for the money, she looked terrible and worn out, I noticed dark bruises on her arms (from handcuffs) and on her face.

The situation with the upcoming referendum got even more frightening. Some of my friends who dared murmur that they are “not clear from whom Russia protects Crimeans” were fired without explanation or pay. It was then explained that the management was under pressure from the occupiers who had given an ultimatum to categorically dismiss everyone who was on the list of “unreliable” people. Most of these black lists were based on who participated in anti Russian protests and were also based on reports of colleagues or, I couldn’t believe at first: if colleagues had Ukrainian symbols (on their work desk or car). Even the Ukrainian flag was under an official ban!

On 15 March they called me from the tax office and told me to go to an “immediate and important discussion.” When I went to the chief inspector’s office, there were already two little green men with masks and machine guns, and one unknown man in civilian clothes. The inspector said in a heavy and stern tone: “Tomorrow you HAVE TO go to the referendum at the polling station on Evpatoria highway. And I hope you understand how you have to vote? And watch out, or we’ll find a little article in the tax code… and you’ll not just lose your little drugstores, but you’ll wind up behind bars for a couple of years! Get it?” The civilian in plain clothes watched him fixedly the whole time and nodded approvingly.

With tears welling up in my eyes I had to go the wretched referendum, but to spite them I voted AGAINST joining Russia! At midnight they phoned me from the tax office (!) and said that I owed them 15,500 grivens and that some documents were not valid because they had not been formulated correctly. Next day a tax case was opened against me and my chain of drugstores was closed down. And the Tartar family were left homeless after the referendum: the bank was asking for the credit back on the car, they did not have the money so their flat, which they had used for security was confiscated.

That’s the most revolting thing, there is now totalitarian censorship in Crimea! No one can say a word about this illegality which is now at every turn! On March 18th I was called to meet a district official, he turned out to be new: a former Berkut from Kyiv! He looked me in the eye and said sarcastically: “Keep your mouth shut and you’ll go far, if you blab you’ll end up in prison!” I kept quiet.

The day before yesterday my wife, a history teacher, was fired from work. Not only had they switched from Ukrainian to Russian, but the children had to use Russian textbooks; “Kyivan Rus” became “the old Russian state.” One objection had cost her her job. Then I realized that if my wife had had the courage to stand up to this oppression, it would be shameful if I was cowardly and kept quiet!

I am currently under written instruction not to leave the country, but I hope to leave this Crimean concentration camp soon, with my family, even if I lose everything. Nothing is more precious than freedom!

PS. Let this be a lesson to the citizens of South-Eastern Ukraine: value your freedom while you have it!

9 Responses to Crimean resident: The Truth about Crimea