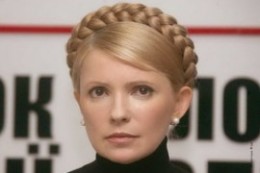 Today, on January 22nd – Ukraine’s Unity Day, Yanukovych commanded to use firearms against the protesters. Serhiy Nigoyan, who was at Euromaidan from the very beginning, was the first to die because of that order. Then, two more sons of Ukraine passed away.

I ask all of you to commemorate them with a minute of silence.

I mourn for all peaceful people, together with their parents, together with everyone who feel their pain. The blood of these Heroes of Ukraine is on Yanukovych’s hands. He personally shot them while giving out a speech on the occasion of the Day of Unity of Ukraine.

Since that moment when Yanukovych “killed” Serhiy Nigoyan and two other boys, whose names we don’t know yet, he ceased to be the President of Ukraine and became a murderer. Since then he doesn’t have the right to take the post of the President even for another minute!

If we, Ukranians, forgive him that, we will deserve everything he’ll do to us afterwards.
Ukrainians, children of our Motherland, uprise for your children, for your parents, for yourself! Don’t let them continue killing you! We don’t have a choice any longer!

The question is very acute: either “they”, or a Free Ukraine! Either our tortured children being the victims or immediate political death of the dictatorship along with its leaders!

I appeal to all people wearing any type of shoulder loops of Ukraine: don’t take the blood of Ukrainians on your own hands. Neither your job, nor salary, nor title aren’t worth of the death of your soul. I invoke you to resign from the ranks of Yanukovych’s contact killers and come over to the side of the country. I know that your mothers pray for Ukraine the same as the mothers of those daughters and sons who you beat up.

Put down the weapons! Don’t shoot those who read Shevchenko’s poems. Those, as Serhiy Nigoyan.
I appeal to the leaders of the democratic world with the request to open the second full-scale front against the dictatorship which has been established in Ukraine. The more you postpone that, the more peaceful Ukrainians will die on the battlefield for their freedom.

Every minute you waste is payed for with Ukrainian blood.

Ukrainians, children of our holy land, rise up!

Don’t let them kill Ukraine! Without you it will not withstand today!

My heart is with you!