Dmitry Tymchuk, Head of the Center for Military and Political Research, Coordinator of the Information Resistance group, Member of Parliament (People’s Front)
06.22.2016
Translated and edited by Voices of Ukraine

Russian-terrorist forces in Donbas continue using small arms and grenade launchers, as well as 120 mm mortars, armored vehicles (BMP and BTR), and occasionally, 122 mm artillery. Enemy DRG’s and sniper groups have stepped up their activity, while militants’ small infantry groups attempt to fire at the ATO forces’ positions at close range from the neutral zone.

In particular, terrorist shellings continue in the area of Avdiivka-Opytne-Pisky. The enemy’s main positions are in the area of Spartak (using 82 mm and 120 mm mortars, as well as heavy machine guns and stand-mounted grenade launchers). When necessary, the militant command also makes use of some of the forces and equipment from its Yasynuvata tactical group.

Militant activity is also noted in the area of Leninske-Mayorsk-Zaitsevo. In addition to small arms, the enemy is using artillery systems from positions north of the Terrykonna railway station and south of the Poselok 6-7 neighborhood. 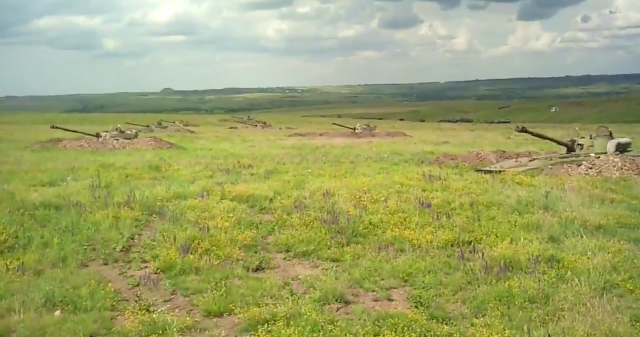 Shellings are permanent practically along the entire stretch from Krasnohorivka to areas south of Mar’inka. There is a notable increase in the enemy’s use of anti-aircraft ZU-23-2 systems.

Permanent shelling with use of mortars is also taking place in the area of Dokuchajevsk and further south, all the way to Hranitne.

The situation has escalated dramatically in the coastal regions, namely in the areas of Shyrokyne, Vodyane, and Talakivka, where militants are conducting short but powerful fire raids, deploying mobile strike groups. In addition, the density of militant combat lines has notably increased: south of the Oktyabr-Bezimenne line, we recorded appearances of armored vehicles, including tanks, of which at least 12, in groups of 2-3, are used to reinforce terrorist units in this area; as well as four BBM’s in the area of Bezimenne itself; three tanks and 6 BMP-2’s in the area of Kominternove; plus a concentration of transport and armored (12-13 trucks and 4 MT-LB’s) beyond the settlement of Oktyabr.

In the area of the Svitlodarsk arc, as well as near the salient around the settlements of Schastia and Stanytsia Luhanska, small militant infantry groups are very active (shoot-outs with the ATO battlefield security take place practically every night). In many instances, these enemy groups operate with the support of mortars and armored vehicles (BMP and BTR).

• the reinforcement of a coastal militant group with combat equipment;

• terrorists’ attempts to retain combat initiative in areas west and northwest of Donetsk;

• the activity of the militant “Horlivka Garrison,” foremost in the western and northwestern flanks, with an escalation trend on the right flank of the Svitlodarsk arc.

Persistent rumors are circulating within the “DNR” militant groups about the deployment of at least two permanent “Russian military bases” in the occupied territories of the Donetsk Oblast: allegedly, the “DNR” leadership has already “reached an agreement” with the Presidential Administration of the Russian Federation and the Russian Armed Forces General Staff (most probably, these rumors are spread with the purpose of “psychological support” for militants).

The “LNR,” in turn, is spreading rumors about the alleged transfer of Ukrainian assault aircraft to Severodonetsk (the “Severodonetsk International Airport” checkpoint). Militants are scaring the locals with stories that the ATO forces are preparing to bomb civilian targets.

Like Loading...
This entry was posted in Dmitry Tymchuk, English News, Pictures, South&Eastern Ukraine, War in Donbas. Bookmark the permalink.