Information Resistance group
12.16.2015
Translated and edited by Voices of Ukraine

Russian-terrorist forces continue to fire on ATO forces’ positions in order to provoke Ukrainian troops into the full-scale use of lethal force. Militants use 82 and 120 mm mortars, anti-tank and anti-personnel grenade launchers, small arms and heavy machine guns, anti-tank rocket systems and the on-board automatic cannons of BMP-1 and BMP-2 infantry fighting vehicles. Carefully camouflaged tanks and heavy artillery (MT-12 “Rapira”) have been observed on the terrorists’ front line.

Increased activity by the aggressor’s sabotage and reconnaissance groups has been noted in several sectors. They lay minefields in the neutral zone, conduct reconnaissance of ATO forces’ combat formations in the tactical and tactical-operational depth by using both electronic intelligence equipment and UAVs [drones]. The intelligence agencies of the “LNR” and “DNR” terrorist organizations use the data obtained from locals travelling to and from the liberated territories in their efforts to assess and detect advanced Ukrainian troop units.

Terrorists carried out fire strikes from the direction of Nyzhnje Lozove, elevation 307.9 meters, and Sanzharivka–Pol’ove with 120 mm mortars, which should have been withdrawn from the demarcation line in compliance with the Minsk agreements. ATO forces positions were also shelled near the Svitlodarsk bridgehead, to the east and north of Avdiivka. Militants fired at our positions in the area of Opytne and the Donetsk Bypass from the area of the Donetsk airport and Spartak. The use of 82 and 120 mm caliber mortars and BMP-2 standard weapons were recorded in this area.

In the area of Novhorodske, a tank and two BMP-2s made a demonstrative move on the leading edge of the front. The movement of an MT-LB and two BTR-80s was detected near Hranitne. Two 120 mm mortars proceeded towards Spartak on a trailer. Terrorists are moving equipment to the Petrovskyi district of Donetsk along the railway track. Four BMP-2, an MT-LB, and two “Ural” trucks with covered mortars were seen being redeployed on a trailer. On the Bakhmut highway, 12 army trucks with personnel were detected; [the trucks] proceeded in the direction of Frunze, Zhelobok, Donetsk while two “KAMAZ” [cargo trucks] and two MT-LB were being moved in the opposite direction.

At the Yasynuvata Machine Building Plant, repairs of the armored vehicles of illegal armed groups are being carried out. Four BMP-1 and BMP-2, five MT-LB, two tanks, six army trucks and a BAT-2 are currently in the shop. 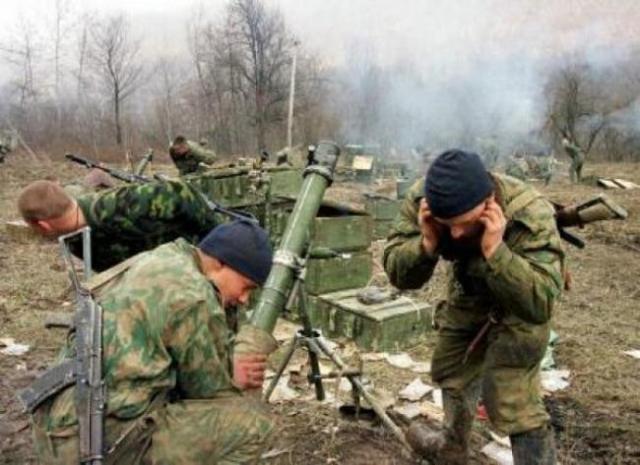