Nadiya Savchenko: I will return to Ukraine at any cost. And I do not compromise with scumbags. #FreeSavchenko

A captured pilot and a member of Verkhovna Rada, Nadiya Savchenko told Focus about the effectiveness of her hunger strike as a protest method and what she would say to the Russian President Vladimir Putin.

By Milan Lelich
08.21.2015
Translated and edited by Voices of Ukraine 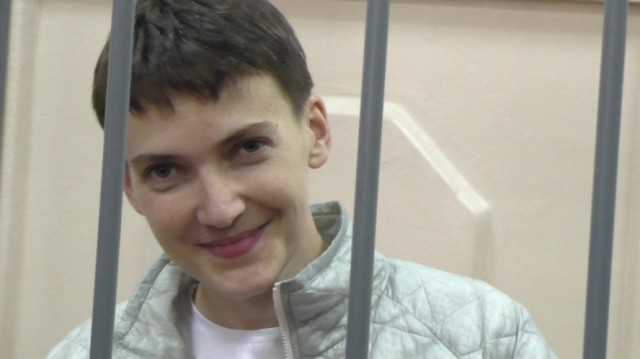 On August 21 [2015], Rostov Regional Court denied to defer consideration of Nadiya Savchenko’s case, a captured Ukrainian pilot, [back] to Moscow. Savchenko herself participated in the [court] hearing via video conference from the prison detention center in the city of Donetsk, Rostov region [Russia], where court hearings will soon resume. Nadiya answered several questions for Focus.

In what conditions are they currently holding you? Are conditions [here] different from conditions at the Voronezh and Moscow prisons?

– All prisons are the same because they are all prisons. But I feel better here because [this prison] is closer to Ukraine and people understand the Ukrainian [language].

Do you have access to information about what is happening in Ukraine and in the world? Who has visited you in detention other than [your] attorneys?

– All information about Ukraine and the world comes to me through the distorted mirrors of the Russian media. Besides the lawyers, I see my relatives one or two times a month.

You declared extended hunger strikes – did they bring about some kind of result? Are you going to resort to this method of protest again?

– This method achieved a certain result. I believe that if I had not stopped the hunger strikes, the result would have been better. In the future, I will have to resort to more radical methods – a hunger strike is not enough.

What do you expect from the upcoming trial?

– One can only expect a show, and not justice, from a circus.

Do you see a possibility of your release and return to Ukraine in the foreseeable future? Are you willing to compromise with the Russian authorities?

– I will return to Ukraine at any cost. And I do not compromise with scumbags.

There were reports that you planned to write a will before your transfer to Novocherkassk [a city in Rostov region, Russia]. Did you manager to write it?

– No, they would not let me do it at the detention center.

Do you notice the efforts that Ukrainian authorities undertake to [ensure] your release?

– Ukrainian people put more effort in [to this].

If you could say something to President Vladimir Putin now, what would it be?

– Better resign while you still can.

1 Response to Nadiya Savchenko: I will return to Ukraine at any cost. And I do not compromise with scumbags. #FreeSavchenko