Posted on August 6, 2015 by chervonaruta

Dmitry Tymchuk, Head of the Center for Military and Political Research, Coordinator of the Information Resistance group, Member of Parliament (People’s Front)
08.05.2015
Translated and edited by Voices of Ukraine

Russian-terrorist troops (RTT) in Donbas continue to carry out active shellings of the advanced positions, command posts, and bases of Ukrainian troops and civilian objects by using artillery (122 mm and 152 mm), 120 mm mortars, and armored vehicles.

Most of the terrorist attacks and armed provocations were recorded in the western and north-western outskirts of Donetsk, Horlivka, and west of Yasynuvata.

Thus, during the last 24 hours, militants have repeatedly carried out attacks on the positions of ATO forces north of Novhorodske and near the village itself, in the vicinity of Leninske and Artemove from 120 mm mortars and 122 mm artillery. Spotters of Russian-terrorist forces were observed within close range of the shellings. 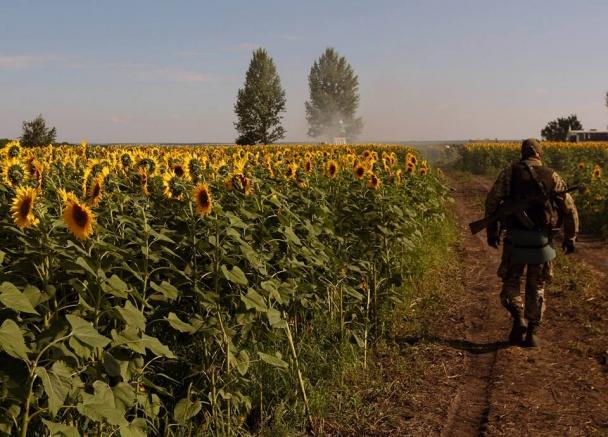 In the area of Mar’inka, Opytne and Vodyane, the activities of several groups of enemy armored vehicles were recorded. In the area of Mar’inka, from the direction of Oleksandrivka, an armored group (two tanks and one BMP-2) was operating – shelling ATO positions from the “greenery,”advancing and leaving firing positions under cover of 82 mm mortars (tank guns made 5-6 shots each, and a BMP [infantry fighting vehicle] fired to provide cover).

In the area of Opytne, the enemy moved several armored vehicles (two T-64B tanks) to firing positions in the “greenery” in advance, after dark. Following additional reconnaissance, insurgents opened fire from their tank guns, after which the tanks retreated to their original line of defense in the depths of the RTT [Russian terrorist troops].

In the area of Berezove and Hranitne, the enemy repeatedly opened fire from small arms, 82 mm mortars, AGS-17, and several times used ZU-23-2. The regrouping of RTT infantry groups was spotted along the front in this sector.

In the coastal area in the section between Sakhanka and Shyrokyne, several firefights with small arms were observed. To the north of this area, near Chermalyk and Mykolaivka, the enemy moved mortars to the front line (both 82 mm and 120 mm [calibers]) – at minimum, three firing positions of militant mortar units were observed (overall – up to six 82 mm mortars and about eight 120 mm mortars).

On the Svitlodarsk bridgehead, militants carry out attacks from small arms and AGS-17. On the bridgehead’s flank, from the direction of Luhansk, militants regrouped armored vehicles outside of Kalynove, south of Rozsadky, and in the area between Pervomaisk and Zolote (to the northwest of Kirovsk). The [exact] number of armored vehicles is currently being determined. Beyond the Popasna – Stakhanov highway in the area between Irmino and Kirovsk, the transfer of a tank group, in the northward direction – up to five vehicles – was observed.

In the area of Novotoshkivka and Krymske, militants fired from 82 mm and 120 mm mortars, and carried out ‘harassing fire’ from small arms. In the wide area from Popasna to Stanytsia Luhanska, along both banks of the Seversky Donets [river], a “warfare of small groups” continues – a large number of terrorist sabotage and reconnaissance groups and raid teams was observed.

In Donetsk, the transfer of terrorist mortar units (three 120 mm and two 82 mm mortars) was spotted along the “frontline” on Shvedov Avenue towards the northeast.

In the area of ​​Prymorske, terrorists deployed and disguised their artillery. Two batteries (a 6-weapon [battery] of 122 mm D-30 howitzers, and a four 152 mm 2A65 “MSTA-B” [battery]) were observed.

The transfer of agricultural vehicles and equipment is conducted from Russia to the areas controlled by the “DNR” and “LNR” [Donetsk- and Luhansk People’s Republics]. The transfer of agricultural vehicles was observed in Amvrosiivka, Krasnodon, and Rovenky. Harvesting is underway in the southern occupied areas of Luhansk region; the presence of Russian experts was observed.