Dmitry Tymchuk, Head of the Center for Military and Political Research, Coordinator of the Information Resistance group, Member of Parliament (People’s Front)
07.29.2015
Translated and edited by Voices of Ukraine

In the stretch between Zelenopillya and the Horlivka – Artemivsk motorway, the enemy has repeatedly opened fire from 152 mm and 122 mm artillery, as well as 120 mm mortars, over the past 24 hours. These shellings provoked a highly negative reaction from the residents of the occupied areas (vicinity of Horlivka), who were accustomed to the reasonable safety of the motorway leading to Artemivsk. Local residents use this motorway to travel to Ukraine-controlled territory in order to receive social security payments and buy medicines, food, and other goods.

The advanced strongholds and ATO forces positions in the areas of Zaitseve – Travneve – Holmivskyi – Novoluhanske were also shelled from 122 mm artillery and 120 mm mortars.

Militants used 120 mm mortars to shell the southern parts of Avdiivka; several fire strikes were also made on the northern outskirts of the town. Terrorists shelled Mar’inka using 120 mm mortars and AGS-17 automatic grenade launchers. In addition to that, two terrorist sniper groups were reported operating in the vicinity of Mar’inka and north of it (in the direction of Krasnohorivka).

The settlements of Opytne and Vodyane were shelled from 122 mm artillery and 120 mm mortars by militants positioned in the vicinity of Donetsk Airport and Spartak. In the same area, small energy infantry groups opened fire from the greenery. Further south, in the direction of Pisky, the enemy deployed two ZU-23-2 mobile anti-aircraft units mounted on mobile platforms (used for random fire).

Terrorists deployed heavy armored vehicles in the vicinity of Shchastya. Namely, three insurgents tanks moved from the direction of Vesela Hora, took firing positions under cover fire of 82 mm and 120 mm mortars, and made up to 10 strikes on the ATO forces positions. Later, insurgents shelled the same area using AGS-17 grenade launchers.

In the vicinity of Zolote, Krymske, and between Popasna and Pervomaisk, insurgents continue using small groups, firing on the ATO positions from the greenery and planting minefields. Multiple clashes with the ATO forces’ battlefield security are reported (in those cases, terrorists usually prefer a quick retreat without engaging in combat). 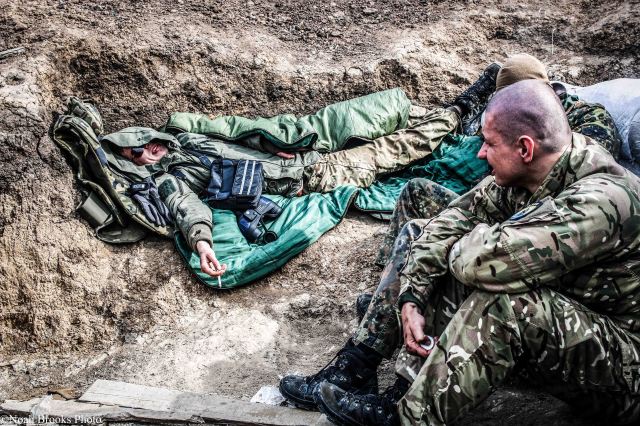 A terrorist armored group (5 tanks, up to 10 armored combat vehicles, including BMP-1 and BMP-2 infantry fighting vehicles, and BTR-80 armored personnel carriers) was spotted maneuvering in the area of Dokuchajevsk.

A tactical militant group previously spotted by the IR group during their transfer to the area of Starobesheve has now taken positions along the Starolaspa – Rozdolne line. As of this time, their camouflaged positions contain 26 tanks, 36 ACVs (including five of the latest Russian BTR-82A armored personnel carriers, and eight Russian GAZ-2330 Tiger armored combat vehicles, part of the reconnaissance unit of the Russian Armed Forces), and up to 20 Kamaz/Ural trucks (including three command vehicles).