Dmitry Tymchuk, Head of the Center for Military and Political Research, Coordinator of the Information Resistance group, Member of Parliament (People’s Front)
07.23.2015
Translated and edited by Voices of Ukraine

In the areas west and northwest of Donetsk, along the entire stretch between Mar’inka and the northwestern outskirts of Horlivka, militants are using heavy armaments for virtually uninterrupted bouts of shelling.

Over the course of the past 24 hours, militants in the vicinity of Donetsk Airport opened fire from the on-board armaments of tanks, APCs and IFVs, trying to engage Ukrainian troop advanced positions. The militants’ armored groups are operating under the cover fire of 120 mm mortars and ZU-23-2 anti-aircraft guns. In addition, enemy infantry groups were active in this area over the past 24 hours, attempting to find positions in the surrounding ruins and vegetation that would be best for firing at the positions of Ukrainian troops.

Militants used 120 mm mortars and 122 mm artillery to fire on the ATO forces positions east of Opytne, on civilian objects near Avdiivka (Chapaeva and Lenina streets), and the eastern outskirts of Vodyane. Fire was conducted from positions in the vicinity of Mineralne and Spartak. The enemy’s sabotage and reconnaissance groups were also active in this area.

The ATO forces position in the vicinity of Luhanske were shelled from 120 mm mortars. Terrorists used the shelling to support their infantry groups operating in the greenery, who, in turn, were trying to suppress the ATO forces’ firepower on the front line. In addition, militants resumed using the “roving tanks” tactic during nighttime. The tanks, operating under the fire cover provided by 120 mm mortars and AGS-17 grenade launchers, are shelling the positions of Ukrainian troops with high-explosive shells, from firing positions prepared in advance.

In the stretch between Berezove, Stepne, Taramchuk, and Novotroitske (an area of Dokuchajevsk), terrorists continue shelling with the use of 82 mm and 120 mm mortars. Occasionally, 122 mm D-30 howitzers are used, from firing positions behind Dokuchajevsk (2 batteries).

Dense terrorist shellings with the use of small arms, 82 mm and AGS-17 grenade launchers were recorded in the following areas over the past 24 hours:

The transfer of the forces and equipment of the terrorist “brigade” continues, from the Mospyne – Komsomolske line directly to the “front line.” The Volnovakha direction is receiving reinforcements: a “motorized infantry battalion” (part of the brigade), together with a tank company and anti-aircraft equipment has transferred to the Novobesheve – Starobesheve – Styla – Komunarivka area. Some of the forces (14 armored vehicles, including 6 tanks and 10 motor vehicles) were transferred south, through Telmanove, to reinforce terrorist tactical groups deployed near Novoazovsk and north of the town (opposite Chermalyk – Pavlopil).

In Donetsk, militant armored vehicles and artillery are being concentrated in several “combat vehicle parks.” The group operating in the direction of Avdiivka is receiving reinforcements. We recorded transfer of two batteries of 122 mm D-30 howitzers. Two tank companies advanced east of Panteleimonivka, total strength of up to 20 tanks, plus several APCs and IFVs.

A militant tank company (7 tanks), escorted by trucks carrying ammunition and suppliers (4 trucks) was transferred from Komsomolske in the direction of Starohnativka.

Large deliveries of ammunition (122 mm rocket projectiles for BM-21 Grad MRLS) are moving in the direction of Frunze and Zholobok, transported along the Bakhmut motorway (11 trucks of ammunition over the past 24 hours).

110-120 militants with small arms and mounted SPG-9 grenade launchers have been transferred to Stakhanov and Pervomaisk, moving through Alchevsk. The group includes three 120 mm mortars. 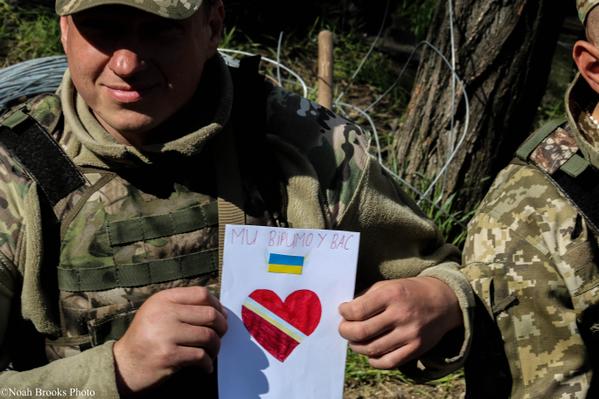 Ukrainian soldier with letter from child that reads: “We believe in you.” Photo: Noah Brooks. Source