Dmitry Tymchuk, Head of the Center for Military and Political Research, Coordinator of the Information Resistance group, Member of Parliament (People’s Front)
07.15.2015
Translated and edited by Voices of Ukraine

We are observing a continuous exacerbation of the situation in the ATO zone, with a strong trend towards further deterioration and escalation of the armed conflict. The shellings by Russian terrorist forces are growing in intensity and density. Insurgents continue making active use of heavy armaments (120 mm mortars, 122 mm and 152 mm artillery, and armored vehicles) to shell positions and strongholds of Ukrainian troops, as well as settlements under their [Ukrainian] control.

The enemy is attempting to scout out the disposition of Ukrainian forces along several sections of the demarcation line, by using sabotage and reconnaissance groups to infiltrate the tactical rear of the Ukrainian troops, and, in some cases, by engaging in skirmishes with the ATO forces using small infantry units (up to a reinforced platoon in strength). Along several sections of the demarcation line, terrorists are trying to trigger a “sniper war,” as several insurgent sniper groups simultaneously are attempting to seize and retain the fire initiative.

Over the past 24 hours, terrorists repeatedly used 152 mm and 122 mm artillery, as well as 82 mm and 120 mm mortars, to shell the positions of Ukrainians troops and strongholds along the Pisky – Opytne – Vodyane – Avdiivka line.  Several fire strikes were made directly on the settlements of Avdiivka and Vodyane. Pisky population’s private housing portion has been reduced to ruins, while shelling continues. In this area, the enemy shelling is virtually permanent [continuous], as the enemy uses different weapons (alternatively or simultaneously) in an effort to engage the advanced units of the ATO forces.

North of Avdiivka (between Novhorodske and Novoselivka), small insurgent infantry groups (up to a platoon in strength) have repeatedly attempted to approach the advanced ATO positions during the past 24 hours. After the advanced units of Ukrainian troops opened fire, the enemy forces fell back to their original positions.

During the past 24 hours, the enemy repeatedly opened fire from 122 mm artillery guns and 120 mm and 82 mm mortar shells on the ATO forces’ positions near Troitske, Novoselivka and Novhorodske.

Several professionally trained sniper terrorist groups operate in the vicinity of Mar’inka, Shyrokyne, Schastya and the Krymske area. In each of these areas, the enemy is deftly using the terrain features when choosing firing positions.

Near the settlement of Starohnativka, insurgents opened fire several times from the greenery in the “neutral zone,” mainly using small arms, as well as AGS-17 automatic grenade launchers and 82 mm mortars [to provide cover] when their firing units had to change position.

Near Luhanske and Mironivske, terrorists fired 120 mm and 82 mm mortars at several positions of the ATO forces simultaneously. Insurgents also employed a standard 125 mm tank gun (from long range). Enemy forces are resorting to these shellings in an attempt to prevent the surveillance efforts of the ATO forces while the first echelon of Russian-terrorist troops is undergoing rotation in this area.

Near the settlements of Krymske, Sokilnyky, Shchastya, and Stanytsia Luhanska, insurgents mainly conducted “harassment shelling” while trying to provoke a return of fire from the Ukrainian side, in order to identify the firepower of the ATO forces at the front line. Enemy observers repeatedly took positions in the vegetation close to the Ukrainian positions. During the shellings, the enemy mostly used small arms and AGS-17 grenade launchers, as well as 82 mm mortars; near Shchastya, insurgents opened fire from a 30 mm automatic cannon mounted on a BMP-2 infantry fighting vehicle.

A troop unit numbering 200-220 personnel was seen arriving in Luhansk. This unit is part of the special GRU brigade of the General Staff of the Russian Armed Forces. The unit was split up into groups and deployed in several districts of Luhansk. 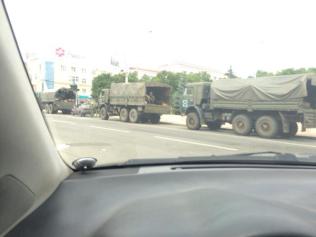 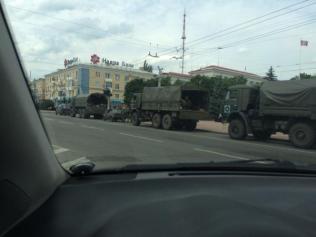 We also noted a transfer of terrorist armored vehicles and artillery to an area north of Rovenky, including ten armored combat vehicles (BMD-2, BTR-80A / 82A, and one BTR-D paratrooper armored personnel carrier), and three 120 mm 2S9 Nona-S self-propelled artillery guns.

Combat equipment continues concentrating around Mospyne, joining the “brigade” deployed in this area. At the same time, some of the combat equipment (six tanks and four BMP-2 infantry fightng vehicles) has been moved further north, towards the southern section of the Donetsk Kiltseva highway [ring road].

Insurgent “reinforcements” arrived to the Petrovskyi district of Donetsk by road (on board of tented trucks, minibuses, and buses) – over 500 personnel in total. Judging by their behavior, these insurgents are not “battle hardened.”

A battery of insurgent D-30 howitzers has been transferred from Horlivka to Vuhlehirsk, together with a mortar unit (operating a total of six “Vasilyok” 2B9 mortars). Two MT-LB trucks and two BTR-70 APCs were also spotted among the convoy. 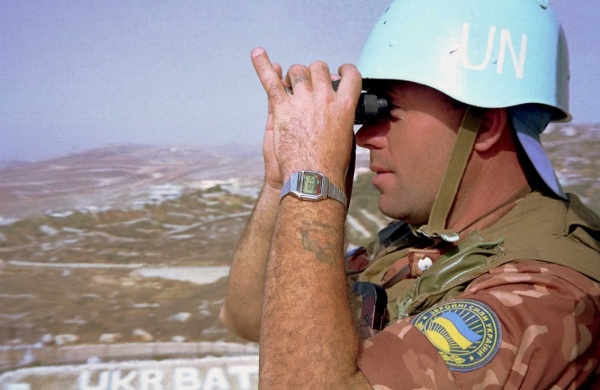 O July 15th, Ukraine celebrates the Day of Ukrainian peacekeepers. For 20 years, more than 35 thousand Ukrainian peacekeepers – including members of Ukrainian Armed Forces and the Interior Ministry – have taken part in international peacekeeping operations under the aegis of the UN, OSCE and NATO in Lebanon, Iraq, Afghanistan, Angola, Liberia, Sierra Leone, Congo, Cote d ‘Ivoire, Sudan, Georgia, the former Yugoslavia and other countries. Peacekeepers, we salute you! Source