Dmitry Tymchuk: Regarding the “national-cultural autonomy of Bessarabia” #FreeSavchenko

Dmitry Tymchuk, Head of the Center for Military and Political Research, Coordinator of the Information Resistance group, Member of Parliament (People’s Front)
05.17.2015
Translated and edited by Voices of Ukraine

Regarding the “national-cultural autonomy of Bessarabia:”

Yesterday, on May 16th in Odesa, the so-called “People’s Council of Bessarabia” held its second conference, at which they presented some “draft law on the national and cultural autonomy of the Bessarabian Region.”

This is a new round of the Russian special service’s activities on the territory of Ukraine. While preparing a large-scale offensive in Donbas, the Kremlin is also trying to ignite a “second front,” so as to destabilize the situation in the South as much as possible, and divert our defense forces and equipment from ​​the ATO zone. At the same time [the Kremlin] is testing the waters for further splitting Ukraine and stealing its territories using a third scenario (after the first two: the bloodless “Crimean scenario” and the bloody “Donbas” one). The proximity of a Russian military springboard in the form of Transnistria makes this scenario not at all unrealistic. 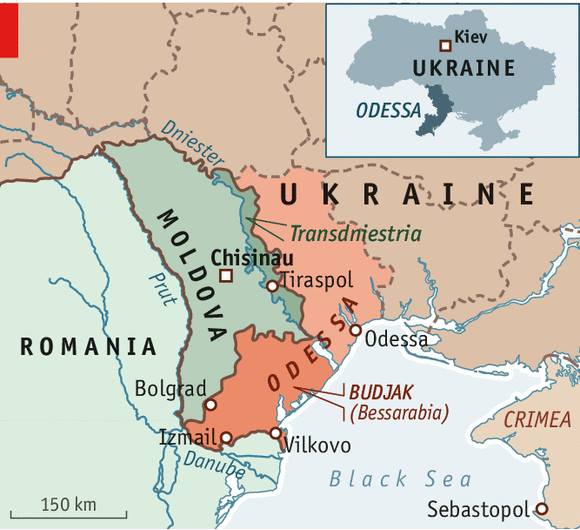 Infographic by The Economist

The newly-minted “Bessarabians” are not trying very hard to conceal the fact that they are controlled by Russia. The conference participants received a greeting from Moscow, by Alik Vetrov, one of the founders of the “People’s Council” and a Russian anti-Ukrainian activist known in Odesa, who stated, “Together with you, I will continue fighting for the bright future of Bessarabia!” There were several more infamous Russian lapdogs on the video call, including the former “Foreign Minister” of Transnistria Vladimir Yastrebchak. (It should be noted that Yastrebchak and Vetrov had long been proclaimed personae non grata by other states in the region that are conscious of their national security – for example, Azerbaijan.)

The “Bessarabians” also did not bother to hide the fact that the “draft law on the national and cultural autonomy of the Bessarabian Region” was written by people whose relation to Ukraine was tenuous at best. That paper slip is chock full of borrowed Russian words (e.g. the phrase listed in this Law translated as перелічені в цьому Законі [an amalgam of Russian and Ukrainian words] instead of перераховані в цьому Законі [correct Ukrainian translation]; the term aimed translated as направлених [Russian] instead of спрямованих [Ukrainian], etc.). If the Russian FSB [Security Service] lacks the wits and finances to pay a Ukrainian-speaking editor $10 to proofread their masterpiece – then I feel sorry for the degenerate agents of this Russian special services that operate under cover of freak shows like the “People’s Council of Bessarabia.”

No-one should let themselves be fooled by “camouflage” stunts such as spreading the statement about a “purely cultural autonomy of Bessarabia as part of Ukraine.” The purpose of this project is to use the cover of language- and culture-related messages to carve a whole region out of our state, and subsequently turn it into a quasi-state formation, much like the neighboring Transnistria. And it’s painfully obvious whose rule it will be under.

The fact that the “Bessarabians” (whose relation with another Russian project, the “LNR” [Luhansk People’s Republic] has been proven by the SBU [Security Service of Ukraine]) are listing tasks for the Verkhovna Rada [Parliament] of Ukraine in their “draft law” and are essentially trying to change the Constitution of Ukraine – that is, of course, a joke. But the real problem lies in the fact that this Russian initiative can actually receive support from certain demographics in the districts of the Odesa oblast listed in the “draft law” (areas that, according to Moscow’s design, should make up “Bessarabia”). The reason for that is simple – those districts are either partially or entirely outside the Ukrainian media field, and have no Ukrainian digital TV coverage (while the TV is the main source of information for the local residents), as the IR group has reported earlier. Instead, the locals spend years being brainwashed by Russian TV, broadcast from Transnistria, even though there is a technical capacity to rectify the situation (without significant costs to the state budget!). The IR group has access to relevant estimates made by professionals. But those are issues for the attention of our Ministry of Information Policy (I have already addressed a relevant query to Yuriy Stets [Minister of Information]).

Thus, seeds of hatred and separatism sowed by the FSB may fall on very fertile soil in the Odesa oblast. With all ensuing consequences…

3 Responses to Dmitry Tymchuk: Regarding the “national-cultural autonomy of Bessarabia” #FreeSavchenko