By Radio Svoboda
02.19.2015
Translated and edited by Voices of Ukraine 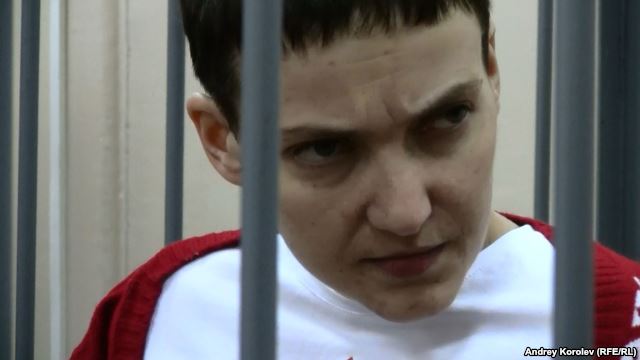 The Ukrainian pilot Nadiya Savchenko, who is already on her 68th day [Ed.: 69th] of hunger strike in a Moscow jail, has refused glucose injections. Her lawyer Mykola Polozov has said this in comments to Radio Svoboda.

“The problem is that in those places where they inserted catheters, there was inflammation of the veins. These catheters cannot be inserted there,” – he explained.

According to him, instead of glucose injections she will be offered to drink a “protein cocktail.”

On December 13, 2014, Savchenko announced a hunger strike and has continued it until now. On January 29, she was transferred to the medical unit.

According to the Federal Penitentiary Service of Russia, a day before, German doctors examined her and identified her health status as satisfactory.

Yesterday, on February 18, a Ukrainian doctor was prevented from seeing Savchenko. Savchenko is asking PACE to provide her with an independent medical commission.

In Russia, Nadiya Savchenko is accused of involvement in the deaths of Russian journalists in Donbas. In late June separatists took her prisoner, transported her across the border and handed her over to Russian security forces. After that Savchenko was taken into custody in Russia. According to the defense, she could not have been complict in the deaths of the journalists, since she was taken prisoner before their deaths.

In late January, investigators informed Savchenko about the opening of a new criminal case against her – for illegal crossing of the border.