Dmitry Tymchuk, Head of the Center for Military and Political Research, Coordinator of the Information Resistance group, Member of Parliament (People’s Front)
01.30.2015
Translated and edited by Voices of Ukraine

During the last twenty-four hours, Russian-terrorists and Ukrainian troops continued to deliver mass artillery strikes on each others’ positions along the entire perimeter of the Debaltseve springboard. In addition to the artillery equipment already present in this area, terrorists brought in at least 8 more MRLS and up to 12 cannon artillery pieces. The enemy is also pulling up self-propelled artillery guns (2S1 Gvozdika) to positions near Horlivka; we observed four such SP guns moving from the direction of Makiivka, escorted by two tented Ural trucks. 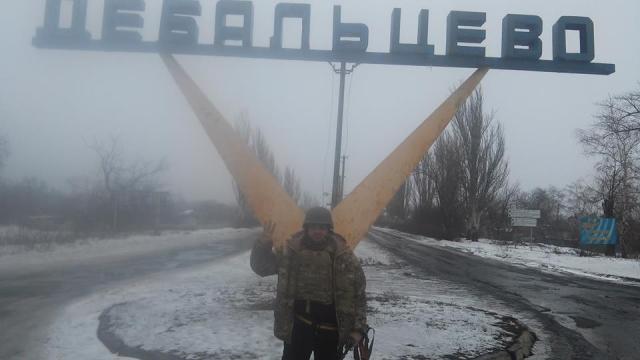 South of Donetsk, Russian-terrorist troops continue regrouping their forces to reinforce the group in the Olenivka – Donetsk direction. A task group consisting of approximately 120 insurgents, 6 tanks, 12 armored fighting vehicles (AFV) and 4 MT-12 anti-tank guns moved into the area between Starobesheve and Styla.

Between Yasynuvata and Horlivka, the enemy continues to reinforce its task group in order to control the Donetsk – Horlivka motorway and makes occasional attempts to advance in the direction of Avdiivka. The terrorists’ attempts to push Ukrainian troops back are, however, largely unsuccessful. During the last twenty-four hours, we observed the enemy deploying additional forces to this area from Donetsk and Yenakijeve – up to 550 persons and 14 armored vehicles (mainly from the “Vostok” and “Oplot” gangs).

Insurgent units from the so-called “Prizrak” [“Ghost”] brigade arrived in Alchevsk to be resupplied with armaments and equipment, after suffering heavy losses north of Debaltseve (losing up to 15 AFVs and tanks, and over 100 personnel). The leading (assault) units of that “brigade” which took part in battles for Troitske and Krasnyi Pakhar were rendered de facto combat incapable.

In the Novoaleksandrivka – Kalynove section, the enemy failed to hold its intermediary positions, and fell back. Terrorists also fell back to their original positions in the area between Svitlodarsk and Luhanske [village in Donetsk oblast; not to be confused with the city of Luhansk]. In this region, they were only active on the Vuhlehirsk – Bulavynske direction.

We are observing intense traffic of supply convoys through Luhansk (3-4 convoys per day, at least 10 vehicles in each) in the Alchevsk – Stakhanov – Pervomaisk direction. They are used to transport ammunition, weapons, and combat equipment (up to 10-12 units per day).

After unsuccessful advance attempts near Stanytsia Luhanska and Shchastya, Russian-terrorist forces started large-scale regrouping of their units to the north and east of Luhansk (starting from Mykolaivka), in order to reinforce their strike groups operating to the north and east of the village of Metalist. The forces concentrated in this area earlier are receiving reinforcements, including at least 6 AFVs and 3 tanks, while rocket artillery units (up to 6 MRLS) are being moved to the area east of the city.

In the area of Mariupol, the enemy is aggressively shelling the front positions of Ukrainian troops (near Pavlopil, Talakivka, Sartana, and eastern suburbs of Mariupol), using primarily cannon artillery and mortars (less frequently, MRLS). Ammunition for the terrorist artillery is being delivered by motor vehicles, directly across the Russian border. Additionally, ammunition stockpiles are created in Novoazovsk using supplies from the Russian Federation.