7 Tanks Against 30: Ukrainian Military Under Mariupol Heroically Engaged In Battle

Posted on September 7, 2014 by chervonaruta

By iPress.ua
09.06.2014
Translated by Stepan Nikitchuk and edited by Voices of Ukraine

Ukrainian tankers show examples of great courage. In the 4 months of the war our soldiers have repeated and surpassed all, or nearly all, that we saw in the Soviet movies and read in books about the World War II. 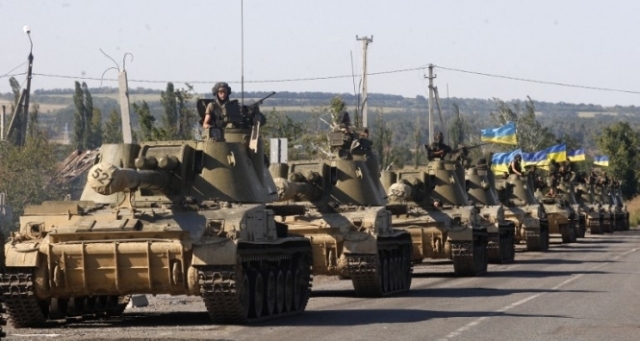 Sergiy Karazy, a journalist, wrote about one of the heroic episodes on his Facebook page:

He said: “Yesterday morning at about 8 a.m., before the ceasefire, at a checkpoint on the outskirts of Mariupol, I met [Ukrainian] tankers that had just returned from a battle. Their seven T-64 tanks ran into 30 Russian T-80s. They took the fight. Lost 4 tanks – returned on three.

Most of the crew survived. Not all. The commander was in a post-shock state. He asked to not to take photos/video and give a rest to the soldiers. After two or three hours the guys were already loading ammunition into the surviving tanks and going back into the battle. They were moving so quietly, business-like, without unnecessary emotions.

This is just one episode in one day. In the 4 months of the war our soldiers have repeated and surpassed all, or nearly all, that we saw in the Soviet movies and read in books about the Great Patriotic War [World War II]. It would be nice if the rest of the country could catch up with the level of our soldiers. All those sitting in restaurants, cinemas, bars and clubs, who book tickets and hotels to go on vacations have to understand what and how much they owe to the guys who sit in the trenches and go into attacks, become happy when they get old armored vehicles, new helmets and flak jackets, lay wounded in terrible provincial hospitals, become disabled for life. They do it all for us. We can never fully thank them for their sacrifice.”

2 Responses to 7 Tanks Against 30: Ukrainian Military Under Mariupol Heroically Engaged In Battle