Khrystyna Bondarenko: Surviving in the Fire

Posted on September 4, 2014 by chervonaruta

By Khrystyna Bondarenko, Chief Editor at Channel 5.ua
09.02.2014
Translated and edited by Voices of Ukraine 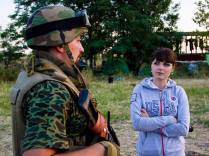 [We are] alive.
The last Ukrainian checkpoint in the direction of Luhansk. A constant bombardment of Grads. In the morning, the alarm sounded – to battle. 15 km from us a convoy of heavy equipment with terrorists was moving. In the complete silence the sounds “chookh-chookh-chookh” [are heard] so clearly that the breath adapts itself to the rhythm.

It’s dark. [It’s] so dark that you can’t see your own feet. We have 20 minutes between the first and the second convoy to escape. The guys will take down the first one, but if there is a second aid [convoy] to the Separs [slang for “separatists”], it is not a done deal.

But we had nowhere to tear out of there to, as it turned out: to the right, there is a separsky checkpoint 4 km [from us], to the left is the territory which has already become foreign recently, straight ahead–Luhansk. We could go back, but there are no guarantees that our own troops won’t take us down there. Oh yeah, there was another option –walking in the green [forests]–funny, [we] dropped that one immediately.

We are waiting. We picked a trench for ourselves. “A coffin”– down into the ground, then into the depth and the concrete slab on top.

It’s scary to everyone. Without exceptions. The “Old One” [his call name] says that only people with mental disorders have no fear. [This] calms us down.

His men are without heavy equipment. A couple of Bucephalus [APCs]. But [they] will stand to the end. You can see it just by looking at them. These [types] won’t retreat. I’m proud of them. Scared for myself.

The portable radio plays all the time. In the green imager one can see the movements of the separov.

Adjustment, fire – with the AGS, then the BTR:
–The resulting report
–Neutralized
–All?
–One is crawling. Do you allow [me] to fire?
–Allowed
–Bu-bukh. And that’s it.
–Tomorrow the intelligence will go out about the bodies that were shot.

Meanwhile, the convoy of terrorists stopped. The patrol reports about two Urals [military trucks carrying] Grads. They are turning around. We’re f…..d, we all thought. But the commander calmly said: if it starts flying at us, you will see the white plumes in the sky, you [will] know where to run.

It flew!!! There are red plumes in the sky, they bombed to the left of us. Very close. The earth is shaking.

The Grads pounded. [They] huddled up and quickly left.
We are all sitting shell-shocked.

It dawns. Dawn is surreally beautiful here. They pour 100 grams [shots]. For the first time in 10 years I ask for a cigarette. One of the soldiers turns on the song “Come Back Alive” on his phone.

Tomorrow I’ll be in Kyiv already. And they will again be under fire. Such austere, tired and very courageous [men]. After this night we became almost family. “Old One,” “Cook,” “Snake,” “Trumpet,” “Santa,” “Frenchman,” “Phil.” Let them stay safe. Besides each other, no one else will protect them in this hot mess…

P.S.: For more about these guys, wait for the second series of the documentary film “Ukraine: Surviving In the Fire” on Channel 5.

4 Responses to Khrystyna Bondarenko: Surviving in the Fire