1. The successes of the ATO forces, which we cheered until just after the end of the “ceasefire,” have changed into “trench warfare.”

The main reason is that by saving its terrorists in Donbas from total defeat, Moscow resorts to every conceivable and inconceivable international crime. This includes the deployment of heavy weaponry to Ukraine (now increasingly so, alongside their military personnel and combat crews), and the direct fire support of insurgents from the territory of the Russian Federation–at the positions of our border control guards and Armed Forces.

I don’t know why we are so stubbornly ashamed to call a spade a spade and officially state that there is a war by Russia against Ukraine. Otherwise, it comes to the point of absurdity.

Here today, for example, the RNBO [National Security and Defense Council] came up with a puzzle. The town of Snizhne in Donetsk Oblast [region] was hit with an airstrike. Our aviation did not even rise into the air [today]. Experts at the ATO headquarters argue that terrorists have no a priori aviation at their disposal. [So] here’s the question: who could have inflicted this blow? The RNBO coined the term, an “unknown aircraft.” So whose plane can this be, if not the ATO forces’ or the insurgents’, how many options are left? Meanwhile, 11 civilians were killed …

Until we call black, black, and the war a war, the theater of the absurd will continue. 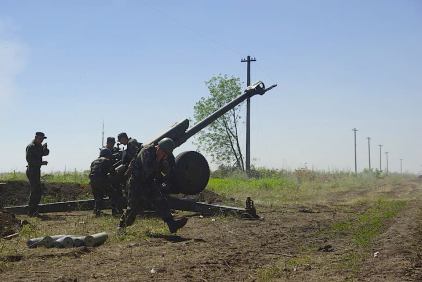 8th Army Corps forces continue to move on Luhansk. Some units are already in the city. These photos show a D-30 Howitzer. Photos sent directly from the best fighters. Source: Roman Bochkala FB

2. From the same series…dances continue around France’s delivery of the “Mistral” helicopter carriers to Putin. The position of Paris: since things between Ukraine and Russia are all well, Madame la Marquise, why should we give up the contract?

The bottom line is that the West cannot supply weapons to Ukraine because it is prohibited [from doing so] by exporter codes of conduct–as in, this is a zone of conflict, [and] weapons cannot be sold here. And Russia, which started and is waging this war, from the point of view of international law has not the slightest relationship to the conflict!

If we can force the international community to recognize that Russia is waging a war against Ukraine–the question of a ban on deliveries of military and dual-purpose goods by civilized nations to Russia will be solved by itself. The one who sells even a cartridge case to Putin [will be considered a] criminal.

3. In Russian cities, local authorities are openly holding send-off ceremonies for “volunteers,” as well as those openly recruited by the military commissariats, for good money, to the war in Ukraine. Today, such a ceremony was held in Samara.

I very much hope that every one of the mercenaries, whom the Russian freaks applauded today in Samara, returns home–to the last. In beautiful zinc containers. Although not quite whole.

1. Today, the [Ukrainian] Foreign Ministry announced: the Ukrainian side hopes that the Council of Europe will decide tomorrow to introduce the next round of sanctions against Russia.

Honestly, there isn’t much hope for it. But our diplomatic sources indicate that just within last week, the rhetoric of many European diplomats changed in favor of Ukraine. Hopefully tomorrow we will still be able to tell Europe “thank you” from the bottom of our hearts.

2. Four crew members of the AN-26 that had been downed yesterday, were rescued by ATO forces. Let’s keep our fingers crossed that the other guys will be alright as well, including those who had been captured.

Today, Russian media showed a video of the interrogation of one of our guys. “I took an oath and [I] do what my conscience will let me live with thereafter,” he said.

I don’t even know why the slow-witted Russian propagandists even began showing this video. They wanted to show that “servicemen of the Ukrainian army underwent brainwashing by Kyiv’s propaganda.” And showed a hero and a patriot who remained faithful to the oath. Ukraine, may you be the envy of the whole planet–for such sons as yours.

3. German Chancellor Angela Merkel began to argue that she was “misunderstood” about [her] support of direct negotiations with terrorists. As in, I did not say that, and I am completely innocent.

I love democratic countries. Ukrainians trolled Angela Horstovna [patronymic play on Horst] on Facebook a tad with the trademark phrase “Danke, Frau Ribbentrop,” and it immediately got a reaction.

If Merkel’s words were followed by deeds and the rejection of any lobbying sympathies towards Putin–she would be priceless. And in fact there is truly an overall impression that the Chancellor is aiming to be a personal retiree of “Gazprom.”

By the way, just like the president of France, who has also been trolled today in social networks for sales of “Mistral.” And rightly so.

[en.censor.net.ua: Merkel Assured Poroshenko that Germany Did Not Urge to Direct Talks with Terrorists]