ROMAN DONIK: The past 24 hours were iconic in the modern history of Ukraine.

By Roman Donik, Army volunteer
07.01.2014
Translated and edited by Voices of Ukraine 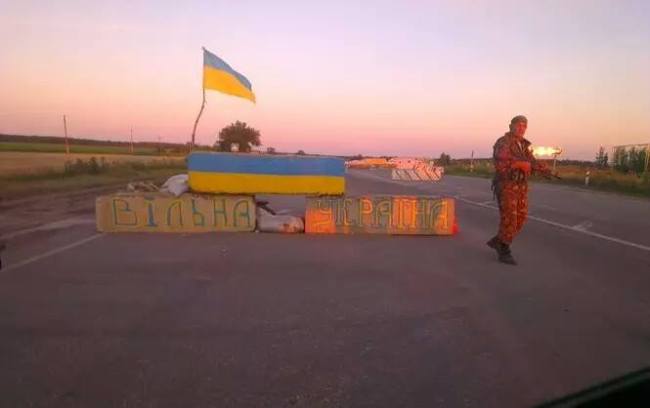 Written on barricade: “A Free Ukraine”

The past 24 hours were iconic in the modern history of Ukraine.

I don’t recall as much hype and near hysteria from otherwise reasonable people, as what followed the president’s speech.

I do not remember this much glow. And Poroshenko said what everyone was waiting for him to say.

After that, everyone involuntarily squeezed their fists, “Well brothers, let’s do it.”
And the brothers did. Oh, and how.

Less than a day has passed since the beginning of the active phase of the ATO renewal.

These 24 hours showed that our side did not waste time in those 10 days.

The whole day I am filled with pride for our army. For these boys, for these reservists and volunteers, and for the hotheads from the National Guard. For all of them, who have changed in two months. Quite different. They became defenders. True. With understanding and awareness of those whom they protect.

I have never seen so many tears of joy with which people greeted the passing vehicles with soldiers.

Each vehicle, each soldier has been christened on the back today–dozens, hundreds of times.

Today, I heard screaming cheers dozens of times, after telephone news received by one of the neighbors. They took it! Battled it out! Captured it! Hurray!

In a few days, our army can completely liberate Ukraine from this vexation. Forever.

News that was shared from Luhansk about people’s attitudes toward events made me very glad. The style remains unchanged.

“Bandits came into the shop of sausages and meat products, the ‘Luhansk delicatessen,’ and took the refrigerators. They will transport corpses [in them].”

The attitude of the insurgents, according to various assessments, is almost the same: demoralized.

They finally realized that they would really be killed. All of them and forever. Most of them are beginning to think over their options for surrender. Mercenaries are trying to stabilize the situation. At first, there will be several executions for desertion, and then local militants will try to fight their way through the mercenaries to surrender to our guys.

A massive disinformation campaign will be initiated now to destabilize the confidence in our own power and to sow discord and doubt in our colleagues and leadership. Traitors, if there are any, won’t surface now.

But we should keep in mind where the unproven and unconfirmed information starts to crawl out from. There they love money more than Ukraine.

In general, God give us patience and tranquility. And strength to all the guys, and stay alive.

2 Responses to ROMAN DONIK: The past 24 hours were iconic in the modern history of Ukraine.