By Yuriy Butusov, Contributing Editor to Censor.Net
Photos are provided by Mykola Kolesnyk
06.26.2014
Translated and edited by Voices of Ukraine

On June 16, in a raid by soldiers from the 40th Kryvbas Battalion of the Ministry of Defense near Donetsk, two terrorists were captured with weapons and documents of the “DNR” [Donetsk People’s Republic] gang formation–[the first, with] call sign “Klotz,” a deputy to the leader of the Russian terrorists in Sloviansk Igor Girkin, and a man with documents in the name of Serhiy Volodymyrovych Tishchenko, the Head of the Anti-corruption Department of the General Directorate for Combating Organized Crime of the GDIA [General Directorate of Internal Affairs] in Donetsk Oblast of the Ukrainian Interior Ministry! Mykola Kolesnyk, the Advisor to the Governor of Dnipropetrovsk Oblast and the staff supervisor of Kryvbas [Battalion] from Dnipropetrovsk Oblast City Administration, who participated in the removal of terrorists to a Ukrainian [military] base, informed “Censor.Net.” According to operational data, Tishchenko was a liaison between terrorists and Donetsk police leadership, and was directly involved in terrorist operations. He previously served in “Berkut” [riot police during Maidan]. He received a Ukrainian government salary, used company vehicles and Ukrainian documents to assist terrorists. At the same time, he has “DNR” documents and travel passes from Girkin.

What other proof of treason on behalf of the management at the Department of Internal Affairs in Donetsk, headed by Pozhidayev, does Ukraininan leadership need to finally dismiss all Donetsk police? That’s enough playing the game of this spectacle–all police patriots are already at war with terrorism, why support a gang of many thousands of traitors, which uses its official position to assist the bandits? 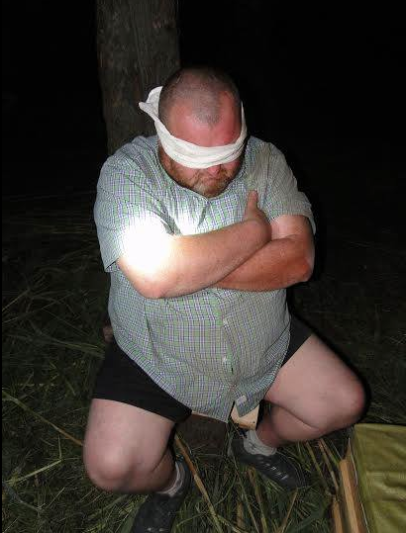 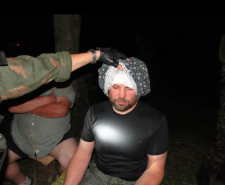 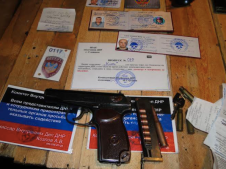 And that’s not all–in the picture, you can see many sets of keys to the apartments, and “Klotz” had many notarized documents on him, with apartments and other property in Donesk and its Oblast having been registered in recent months in his name and the name of his associates. According to “Klotz,” the residents turned to him and Tishchenko with a request to take this property “for storage.” Generally speaking, it’s obvious that there is an organized group that rewrote property of Donetsk residents into their names under the pretext of “the fight for independence.” The fate of apartment owners, whose keys were found on “Klotz” and Tishchenko is currently unknown, most of them don’t communicate…

I’d like to express a separate ‘thank you’ to the soldiers of the Kryvbas Battalion. This is an army battalion that is composed entirely of volunteers from Dnipropetrovsk Oblast. By the way, overall, there are four regular volunteer battalions formed in Dnipropetrovsk–all of them are currently serving in Donetsk Oblast. The authorities of Dnipropetrovsk Oblast City Administration requested to allow the formation of the fifth battalion, the volunteers had already applied, and are waiting for the order, formation of their command and issue of weapons. Most soldiers at Kryvbas Battalion are Russian-speaking Ukrainian patriots. Just recently, they were peaceful people, but today these patriots took weapons in their arms and performed [their] military duty in the ranks of the Ministry of Defense. Photos are provided by Mykola Kolesnyk.

A people’s deputy [member] at Kryvyi Rih city council, Kolesnyk participates in armed fights holding weapons in his arms; he is holding the flag of his native city in a photo taken near Amvrosiyivka.