A pro-Ukrainian rally in the Ukrainian city of Odesa today, May 2, turned violent when pro-Russian separatists began throwing stones at marchers. The clash continued in the Kulikovo field and the Odessa trade union building was set on fire by arsonists. As a result of the fire, 31 people were killed. During the clashes, 4 people were killed and 15 were injured according to the Interior Ministry.

About a thousand activists with Ukrainian flags gathered in Odessa’s Cathedral Square. Football fans were also planning to take part in the march. Not far from their gathering place, there was a small number of police officers. Activists shouted slogans such as: “Glory to Ukraine! Glory to Heroes! Glory to the nation! Death to the enemy! East and West together!” as well as anti-Putin chants. 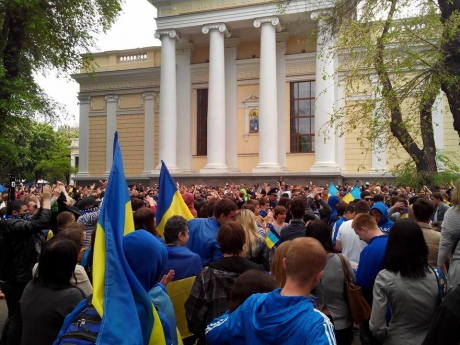