Anton Shekhovtsov: Fascist vultures of the Hungarian Jobbik and the Russian connection

Anton Shekhovtsov: Fascist vultures of the Hungarian Jobbik and the Russian connection

The tolerance of the Parliamentary Assembly of the Council of Europe (PACE) towards the extreme right revanchist rhetoric during its sessions is disgusting and totally unacceptable. On 9 April 2014, Jobbik‘s MP Tamás Gaudi Nagy made a 3-minute speech against European democracy, and even when the hateful nature of his speech became obvious, he was still allowed to continue. 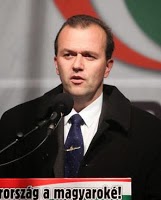 In particular, this Hungarian fascist – wearing a T-shirt saying “Crimea legally belongs to Russia! Transcarpathia legally belongs to Hungary!” – stated that “Ukraine is an artificial country” and that Transcarpathia should be “returned” to Hungary. On 28 March, the same fascist Gaudi Nagy organised a 200-300 strong demonstration in front of the Hungarian foreign ministry in Budapest, with participants carrying banners saying “Autonomy for Transcarpathia!” and “Hungary wants Transcarpathia back!”. The same Gaudi Nagy has recently thrown EU flags out the window of the Hungarian parliament. Why the PACE has completely ignored all these anti-European, anti-democratic acts is beyond comprehension.

Like Loading...
This entry was posted in Analytics, Blogs, English and tagged fascism, Hungary, PACE, Russia, Ukraine. Bookmark the permalink.

5 Responses to Anton Shekhovtsov: Fascist vultures of the Hungarian Jobbik and the Russian connection