“Don’t relax, or you may catch a bullet”: stories of Maidan’s photographers and live streamers

These people are always in the thick of the revolutionary action, in all the hot spots and know first-hand what tear gas or flashbang grenades are. Thanks to them and people like them we know what actually happened. Their every photo, every minute of video shot, are direct evidence of events during those turbulent days and a direct answer to the propagandists on both sides.

We would like to introduce you to three stories of photographers and live streamers who were constantly in the thick of the action on Euromaidan but remained on the other side of the camera.

Maksym Kudymets, photographer at The Insider

I didn’t come to Maidan, only a few days during the three months of revolution, and was there at practically all the clashes. I only missed the brutal dispersal of students on the night of November 30, 2013. But in general, I always filmed all the attempted assaults and crackdowns, fights on Hrushevskiy Street and around the government district. The editorial office didn’t force me to get into the epicenter of events. It was more my own decision to be there. I did everything at my own fear and risk.

When the clashes begin, emotions become secondary and  the brain immediately starts working very actively. You evaluate the situation, make forecasts about possible ways the events might develop, think about possible ways to retreat in case there is an assault, choose a position for filming, watch so that you don’t end up in the trajectory of bullets, paving stones or Molotov cocktails… Meanwhile, you look through the viewfinder, try to make decisions about the composition and from time to time press the shutter button. At such moments you feel fear and concern for the people, but real emotions kick in only when you get out of there. Nevertheless, at the same time you understand that you must not surrender to those emotions because relaxing, even for a few seconds, may result in catching a bullet.

On December, 1 I was filming clashes on Bankova Street while standing aside between the protesters and the soldiers of the internal troops [Ministry of Interior Defense]. At the moment when “Berkut” soldiers had run onto the battlefield, everyone including me and other photographers started to flee in panic towards Instytutska Street. When I was already not far from there, I overheard some women saying that “Berkut” doesn’t attack those who are not fleeing. After noting that I’m keeping a safe distance, I stopped to take pictures of the soldiers. Some of them went by. However, one “Berkut” soldier apparently didn’t like my leg and beat it with a baton. Another employee of the special forces (in spite of the fact that I had raised my hands and said that I’m a journalist) punched me in the kidney, and another two times in the legs. Surprisingly, I managed to flee from there.

I was most impressed by the cruelty and heartlessness of the “Berkut” soldiers and other officers who killed and beat people. And by the courage and kindness of the people on Maidan. Burning tires, Molotov cocktails, APC vehicles, water cannons, firefights and clashes were simply breathtaking.

Everything that I was filming was interesting, because I saw a lot of it for the first time. The most memorable were the people, who came to Maidan on the first day; the fight on Bankova Street on December 1; thousands of people in orange helmets against thousands of black helmets of “Berkut” and internal troops soldiers on December 10; barricades; fire and ice on Hrushevsky Street; talks with “titushkas”; murders on Instytutska Street… Should everything start anew, I will be in the thick of the action. But may it never happen again.

I was permanently on Maidan and made photos starting from November 24 (but it was just for myself and not a job). In the beginning, I was helping at the press-center, later – at the International journalist center; but started streaming only after events unfolded on Hrushevskiy Street. I was just making pictures, meeting people who work at Spilno.TV and began to cooperate with them.

You could feel extreme which was incomparable to anything else. When you sleep till 10 or 14 and go on the night patrol to stream in the evening, your blood is full of adrenaline. The most complicated working conditions were when the temperature reached -24 degrees and we had warmers on our feet, hands and telephones. The telephones were constantly turning off by themselves and we needed to take off gloves to turn everything on. We didn’t have a predetermined working day: we just warmed up and returned to stream. We didn’t run after sensations – we just tried to make it to all places and cover all events.

The only thing that saved me a lot of times was that I had learned to run fast in my sports classes. There was an actual chase after journalists (people in orange vests) at the hot spots. During one of my streams I counted 5 stun and smoke grenades, which flew in my direction.

Once within a minute two journalists, who were standing near me, got their heads injured by paving stones thrown by “Berkut” soldiers. In another minute, after the head of a medical worker was smashed in the same way, I just couldn’t stand it any longer. I ran to the militia cordon and started shouting at them: “What are you doing?! Come to your senses! Don’t throw paving stones at journalists!!” Tears were running down my cheeks, I was shouting… My anger was so great that the soldiers of the internal troops literally stepped back when I was running towards them.

On January 22 I had a clash with “Berkut” soldiers. Five of them ran to me, threw me to the ground, and took my telephone and respirator. I went to the press center and found out that Nihoyan was dead. I was friends with him. I talked to him almost every day… Then, to get distracted from all of this, I talked to a psychologist, took a sedative and returned to stream. At that time I clearly understood that we are standing on Maidan not for European integration, but for the people we knew.

Probably, this situation is common for all streamers: you are filming, counting seconds, searching for a nice perspective and at the same time reading comments and getting inspired by them. Commentators were constantly asking whether everything is alright with me, whether I’m not injured. It was pleasant. Sometimes my streams were watched by a lot of people, sometimes – by just a few. The greatest number was 53 thousand. I have counted that people from 25 countries have commented or liked my videos.

When the events unfolded in the middle of February, I stopped streaming. It was something psychological, maybe some block. I was at the epicenter of the actions, I had seen everything, but I didn’t want to take my camera and stream, I didn’t feel like doing it. It was hard to look at the Trade Unions Building burning down and think about the fact that on the second floor, where I had worked, people were burning alive at this very moment. There were a lot of streams and I understood that I may help at other places. That’s why we brought tires, firewood and a lot of other things… It was horrible.

I still haven’t looked at the list of the Heaven’s Hundred, I’m afraid to see there the names of people I knew. Maybe, when everything will be alright in our country, I will allow myself to take a look at it.

As of today, I’ve started streaming again. Of course there is something paralyzing about deciding what to do and where to go next, about the people who died… But we need to overcome ourselves and begin to work. We don’t have any other options left, do we? 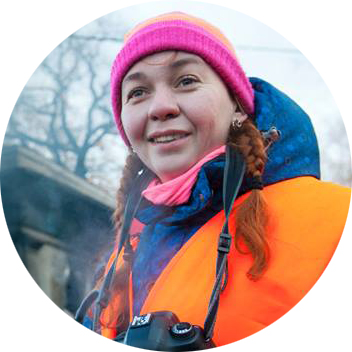 Since December 1 I was at Maidan almost all the time – if I couldn’t be there from the beginning of an event, I joined it in a couple of hours. I only missed the clashes near the presidential administration building and arrived when the worst was already over on January 20th.

I came voluntarily – in order to film the ongoing events and to show them to our readers. The editorial office left the decision about being at the hot spots to my own discretion, because the only things I had to protect me were an orange “Press” vest and a pink hat. All those events were of historical importance regardless of their outcome, that’s why I saw unique relevance in their documentation. My every photo is a fact and a proof!

My condition during the major clashes was even – I would even call it distant. Maybe that’s my strength, who knows… Everything was perceived through a viewfinder, only as documentation – there is no place left for emotions and hysterics, in this way you only decrease the odds of staying alive, orienting yourself, lying down on time and not becoming a target for a grenade or a bullet. Just concentration and calmness. I was waiting for a pullback, but it didn’t come to that.

From what I have filmed, everything was interesting – wherever and whatever I would be filming. All of them are people: both “Berkut” and oppositional Maidan. All of those are human lives – it was equally horrible and painful to watch bloodied people who die because politicians behave unprofessionally and foolishly. All of it was only a consequence of the most stupid decisions of the authorities, when everything could be resolved by a mere understanding of the situation and a political dialogue. I’m happy that it’s finally over, at least in Kyiv. I hope that there will be no blood in Crimea. I really hope for it.

Should there be an event and photographers and journalists will be needed, I will be there filming. The task of the media is to deliver real facts not distorted by subjective and editorial evaluations. Of course I’ll go there; of course I’ll film it and will try to remain objective – it’s the most important thing for me!

3 Responses to “Don’t relax, or you may catch a bullet”: stories of Maidan’s photographers and live streamers