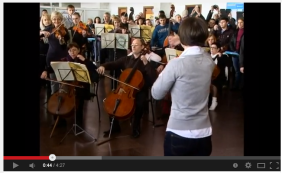 On March 30 at 13:00, orchestras of six Ukrainian cities (Lviv, Kyiv, Kharkiv, Donetsk, Odesa and Dnipropetrovsk) held simultaneous flashmobs, performing ‘Ode to Joy’, the anthem of the European Union, in the international airports of the respective cities.

According to Mediaport, the event was part of a volunteer project ‘Our common air’ to honor those who died in Kyiv on February 18-20. In honor of the deceased policemenand ‘Heaven’s Hundred’ symphony orchestras of these cities played the anthem of the European Union at the same time.