Russian-speaking Ukrainians to Putin: We don’t want your help or your war!

RUSSIAN-SPEAKING UKRAINIANS TO PUTIN:
WE DON’T WANT YOUR HELP OR YOUR WAR

Vladimir Putin is attempting to justify the Russian invasion of Ukraine by claiming that he is rushing to the rescue of the country’s oppressed Russian-speaking minority. However, it is becoming increasingly clear than many members of this supposedly oppressed minority neither welcome nor support Putin’s military intervention.

As the Russian invasion of Ukraine unfolds, more and more Russian-speaking Ukrainians are taking to social media and joining public protests in a bid to declare their opposition to the Russian aggression and express their contempt for the distortions being promoted by the Kremlin in order to justify Putin’s military aggression. This increasingly strident and vocal opposition from Russian-speaking Ukrainians undermines Moscow’s publicly stated justification for war, and poses serious questions about the true motives behind Putin’s invasion of Ukraine.

Ukraine-based Russian-language author Andrey Kurkov, who has authored such international bestsellers as ‘Death and the Penguin’, spoke for millions of Ukrainian Russian-speakers on 2 March when he outlined his opposition to Putin’s Crimean invasion in an emotional online post. “My ancestors settled in Crimea in 1785,” wrote the internationally acclaimed author. “Growing up in Crimea, I was nurtured on Russian culture. I think, I talk, and I write in Russian, and I want to say this with every fibre of my being – I demand the immediate removal of Russian troops from Ukraine.”
Kurkov’s outright rejection of the Kremlin’s claims to be defending the rights of Russian-speaking Ukrainians was one of many thousands of similarly forthright messages to appear online during the first days of the Russian invasion, reflecting the credibility gap between the official Moscow position and the reality on the ground in Ukraine. His comments highlight one of the key misconceptions about the crisis in Ukraine – that the country’s Russian-speakers are automatically in favour of closer ties with Russia itself.

Journalists seeking to make sense of Ukraine’s complex identity issues continue to latch onto language as a shorthand way of understanding the rival geopolitical sympathies in the country. However, in reality, a person’s mother tongue is simply not an accurate guide to their political affiliation in today’s Ukraine. International coverage of Ukraine’s Euromaidan revolution and Russia’s subsequent military invasion has been badly hampered by the highly inaccurate assumption that all of the country’s Russian speakers want Ukraine to remain in the Russian orbit, while Ukrainian speakers are universally pro-EU. This is not merely overly simplistic – it is dangerously misleading. There are actually millions of Russian-speaking Ukrainians who are proud of to be part of the greater Russian cultural world, while at the same time also favouring European intregration. They are proud Russian-speakers, and proud Ukrainians.

The sheer folly of equating Russian-speakers with Kremlin supporters is perhaps best illustrated by the situation in the Ukrainian capital city. Kyiv is an overwhelmingly Russian-speaking city, and yet it is also a bastion of pro-European, pro-democracy sentiment. Indeed, it is no exaggeration to say that Ukraine’s Euromaidan protests would not have been possible without the emphatic and sustained support of Russian-speaking Kyiv residents, who kept thousands of activists fed and clothed throughout months of protests. And yet according to the overly simplistic picture presented in much of the international media, Russian-speaking Kyiv should be a stronghold of pro-Kremlin sentiment.

Language has long been a highly politicized issue in post-Soviet Ukraine, where it has often been exploited as the country has sought to develop a new and inclusive national identity from the wreckage of the Soviet inheritance. There have been numerous political confrontations over the years involving efforts to secure official status for Russian or protect the Ukrainian language from being overwhelmed by Russian in the public sphere. However, while arguments over the status of the Russian language are nothing new, the idea that Ukraine’s Russian-speakers are an oppressed minority in need of military protection is so absurd that it would be comical were it not now associated with such tragic consequences.

With captive Russian TV audiences currently being subjected to a torrent of non-stop disinformation, Russian-speaking Ukrainians have been taking to online forums in an attempt to debunk the myths and propaganda which have whipped the Russian public into a war frenzy. Meanwhile, Ukrainian academics have appealed to all Ukrainians to phone friends, family and acquaintances in Russia and tell them what’s really going on in Ukraine. 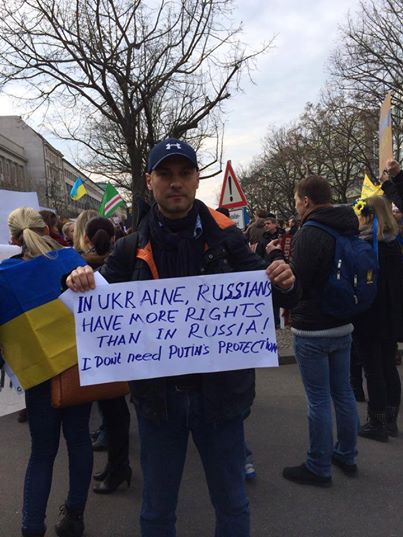 4 Responses to Russian-speaking Ukrainians to Putin: We don’t want your help or your war!