Alexander Babych: It Will Be Easy for Us to Kill Russians, and for Russians to Kill Us… 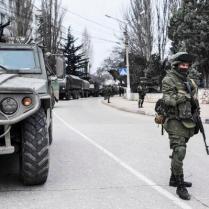 Here, I’m talking about the technical side of our deaths:
– We speak the same language and will understand radio communications – and it’ll be easy for us to kill Russians and for Russians to kill us!

– Our armies are armed with virtually similar weapons and ammunition – it’ll be easy for both of us to kill each other!

– We all learned to make war using the same army manuals (translating the “Temporary Regulations of the Armed Forces of Ukraine” into Ukrainian didn’t change its contents) – and it’ll be easy for us to kill Russians and for Russians to kill us!

– Maps, documents, regulations, etc. are all, basically, in the same language – it’ll be easy for both of us to kill each other!

– It’ll be easy for us to interrogate and torture Russian prisoners of war, and for them to do the same to ours – no language barriers!

– It’ll be easy for us to kill Russians and for Russians to kill us – we know the territory where we’ll be killing each other (I’ve often gone hiking in the Crimean mountains, with my Russian friends), and 80% of my tourist guests were Russian!

– In the dark, with bad coordination between our units, the language factor and the similar uniform and weapons will cause confusion, and we will be easily killing Russian forces as well as our own. And they will have the same problem (as shown in Chechnya).

– Our funeral squads will bury the dead from both sides, in temporary graves or sanitary burials. And the names on the plywood plates above the graves will be written in the same language, both the names of “the enemy” and of “our guys.” After the “victory” (whoever “wins” this f..cking thing), it’ll be a challenge to decide whose banner should fly over whose grave marker (in the Russian army, there are as many soldiers called [Ukrainian-sounding] “Kovalenko” as there are soldiers called [Russian-sounding] “Ivanov” in the Ukrainian army). As someone who dealt with reburial of our soldiers fallen in the Great Patriotic War [1941-1945], I know how difficult it is to sort them out afterwards.

But burying in this war will be easy – everyone will be OUR GUYS!!!!

I am a Russian-speaking historian from Odessa who wrote scripts for the “History of the Russian State,” “Time of Victory,” and “Battle for Moscow” documentaries on Russian TV, and I cannot wrap my mind around the phrase: “RUSSIAN OCCUPATION TROOPS IN UKRAINE!!!!”

But I’ll remember my service in the special units of the USSR Internal Forces (near Moscow, from 1989 to 1991), and I, in my 43rd year of life, will request a submachine gun, to protect my Ukraine from Russian occupants! And in so doing, I understand that in my sights, I might see the guys I served with, or the guys I took on tours last summer, the guys I wined with, sitting by the sea…

Russians, I will be protecting Pushkin’s house in Odessa – from you!

Russians, I will protect Bunin’s flats, Tolstoy’s and Vorontsov’s Palaces, the Potemkin Stairs, and the monument to Catherine the Great – from you!!!! I will protect the graves of both my grandfathers – war veterans (a seaman of the Black Sea Navy and a hero of the Stalingrad battle). I will protect my grandmother, a war veteran; my wife, a Russian woman by the name of Svetlana Ivanova; my three children, my mother, my father!!!

P.S. Of course, I’m not the warrior I once was. Just like many other Ukrainian men, who will sign up with the volunteer corps tomorrow, to the chords of “Farewell of Slavianka” [traditional soldier’s goodbye march] – I’ll come home in a box and will be buried in Odessa. I won’t get to visit Kamchatka, as was my childhood dream… I won’t live to see my children get married, neither my two one-year-old princesses, nor my son Anton. I won’t live to bury my parents… ((((

But I will protect my Homeland – Ukraine, and I will curse you with RUSSIAN swear words! Because I won’t have the time to learn Ukrainian well enough – I’ll die at the hand of a Russian soldier…

Russians, think about it – do you want to kill Ukrainians, so easily, and revel in patriotic delight as you bury your guys and our guys in the common graves of their grandfathers?????

5 Responses to Alexander Babych: It Will Be Easy for Us to Kill Russians, and for Russians to Kill Us…