Dmitry Tymchuk, Head of the Center for Military and Political Research, Coordinator of the Information Resistance group, Member of Parliament (People’s Front)
06.18.2015
Translated and edited by Voices of Ukraine

The activity of the Russian-terrorist forces in Donbas continues to increase. Besides fire strikes (including the ones from heavy weapons), attempted tactical offensives by [insurgent] gangs have increased in several directions.

Starting from the evening of June 16 and until the morning of June 18, Russian-terrorist forces have made at least five attempts to break through the defenses of Ukrainian troops in the vicinity of Mar’inka, at the same time carrying out massive shellings of the ATO forces’  positions. At the moment, the situation in this area more closely resembles the situation near the Donetsk airport (DAP) during its defense by Ukrainian troops in the winter of 2014—2015, when terrorists concentrated significant forces to shell ATO troop positions and carried out offensive actions continuously.

On the night of June 16 to 17, 2015, [insurgent] gangs attempted to perform the task they desperately failed to accomplish on the afternoon of June 3, during a large-scale assault on Mar’inka. At dusk, an enemy tactical group numbering 100-120 people accumulated in the vicinity of ​​a [collective] farm, and another group (up to 50 people) collected from the direction of Olexandrivka. Meanwhile, three T-72B  tanks of terrorists came up to the “neutral zone” and shelled the ATO forces’  positions with high-explosive shells, alternating between reaching the distance of direct fire, and leaving the starting line. After a relatively short shelling (each tank released 10 to 15 rounds), insurgents began shelling the positions of Ukrainian troops from 120-mm mortars, covering the retreat of their tanks. After the pulling back their armored vehicles, the insurgents launched an attack (trying to enter the flanks of the Ukrainian units), which was foiled by dense automatic machine-gun fire, from the ATO forces’ AGS-17 and 82-mm mortars.

During the past 24 hours, insurgents were also particularly active in the direction of Artemivsk.

Insurgents used 9P132 “Grad-P” MLRS in the vicinity of Troitske; the shells [for this system] are delivered by insurgents in “UAZ” vehicles. Meanwhile, the enemy has also used BM-21 “Grad” MLRS in this area.

Terrorists have used 122-mm artillery and 120-mm mortars massively – south of Donetsk (in the vicinity of ​​Hranitne and Starohnativka).

In the area of Shchastya and Stanytsia Luhanska, the enemy has fired from infantry weapons; an enemy sabotage and reconnaissance group has also been observed. Terrorists have fired on the positions of the ATO forces in the vicinity of Toshkivka, Novotoshkivka, Krymske, and Triokhizbenka from SPG-9 “Spear” grenade launchers and AGS-17; 152-mm artillery has also been used.

Movements of insurgent equipment and forces:

• In Luhansk, a build-up of armored vehicles continues –  five tanks and two BMP-2 have arrived; a “Strela-10M” air defense missile system was detected in a convoy.

• The transfer of six BMP-2 was observed between Obilne and Starobesheve in the direction of Donetsk. BMPs look as if they have been “restored” after combat.

• Seven tanks, one Ural [truck] with a ZU-23-2 and four Kamaz [trucks] accompanied by “DNR police”cars have arrived in the Kyivskyi district of Donetsk from Makiivka.

• Transfer of a 152-mm 2S3 “Akatsiyia” self-propelled artillery accompanied by two BTR-80 was observed between Lutuhyne and Novofedorivka; the vehicles were moving in the direction of Krasnyi Luch. 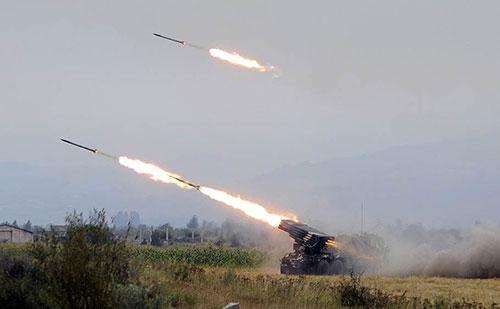