“You will make it to captain with me!..”

Different people serve on the frontlines in the ATO [Anti-Terrorism Operation] zone. We regularly meet charismatic and extraordinary people [there]. Serhiy Filippov, Medical Services Corp Second Lieutenant, is one of them. 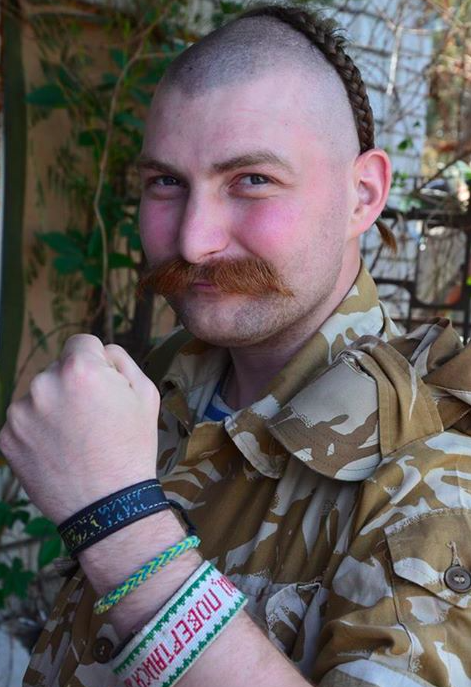 The medical station head of a battalion of a separate mechanized brigade that carries out combat missions in Sector “A” of the ATO, according to the command, Serhiy is not only a great expert, but also a natural comedian and a master of witty jokes. In addition, the 28-year-old medical officer has an unusual appearance: a red mustache and a Cossack oseledets woven into a braid.

“This is an old Ukrainian national military haircut, he says.  If we serve in an active army, then we must follow martial traditions of our ancestors.”

Serhiy graduated from the Kharkiv Medical University and was drafted into the Armed Forces of Ukraine during the August mobilization last year. He is a Donbas native, from the city of Kostyantynivka [Donetsk region]. The military doctor has plenty of work: examining the sick and the wounded, providing medical care, evacuating the sick and the wounded to permanent medical facilities.

According to Serhiy, a funny incident happened to him immediately upon his arrival to the unit. He got his own call sign practically on the first day of his military service.

“We, the newly mobilized, were brought from the collection point to the deployment site of a military unit,” he says. “We had not really had time to even look around and understand how things worked. We were immediately accommodated in the barracks. So I entered the sleeping room, where they showed me my bed. And there, practically at the door, I bumped into some fellow in a military uniform. I knew nothing about the epaulets and ranks then. I look at him – [he’s] tough, ‘pumped up.’ He critically examined me from head to toe in the same manner. I wore a striped undershirt [Ed. Note: Ukrainian seamen wear it] and a blue bandana. And so he said: ‘Oh, what type of Jack Sparrow are you?..’ Everybody saw the Pirates of the Caribbean film series and remember how Johnny Depp’s character reacted when people forgot to call him ‘Captain Jack Sparrow.’ So I decided to make a joke and replied emphasizing the word ‘Captain:’ Captain Jack Sparrow!!! The fellow smiled, slapped me on the shoulder (his arm was pretty heavy) and said, ‘You will make it to captain with me!..’ Not only did I get my radio call sign, but I also became personally acquainted with our brigade commander.”

Since that time, the soldiers of the battalion call the doctor nothing but “Pirate.” The battalion physician is well-respected, he has saved plenty of lives in his year of service. Besides, by virtue of his cheerful nature, Serhiy always supports the morale of his military brothers.