Dmitry Tymchuk, Head of the Center for Military and Political Research, Coordinator of the Information Resistance group, Member of Parliament (People’s Front)
05.28.2015
Translated and edited by Voices of Ukraine

Russian-terrorist forces continue blatantly violating the ceasefire imposed by the Minsk Agreements by firing at ATO forces’ positions along the entire line of contact.

All insurgent units operating in the vicinity of the Bakhmut highway, Stakhanov, Alchevsk, and other settlements north of the Donetsk-Luhansk highway have moved under the “central military command” of the LNR terrorist organization [Luhansk People’s Republic]. Manpower and equipment are accumulating at the flank positions in the area near the Zholobok – Slovianoserbsk stretch and northeast of Pervomaisk. 17 armored vehicles and trucks have been transferred into the area.

Regrouping of terrorist manpower and equipment continues between Yasynuvata and Horlivka. Two firing units operating 122-mm artillery have been moved to this area through Panteleymonivka (eight D-30 howitzers), while 12 tanks and armored combat vehicles were transferred through Yenakijeve.

Several mortar batteries operating 82-mm and 120-mm mortars (up to 16 mortars in total) have been moved to the Kirovskyi district of Donetsk.

Two support convoys consisting of 15 vehicles, including tanker trucks, have passed from Krasnodon in the direction of Luhansk  and Lutuhyne.

Multiple trucks have been spotted moving towards Horlivka and Donetsk through Makiivka. 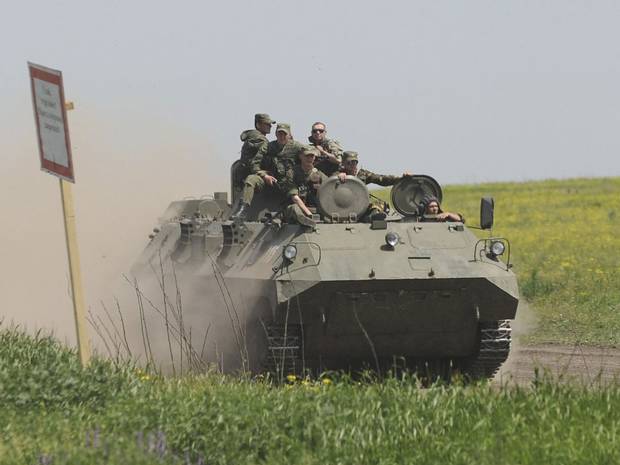 Several additional control points and logistical supply bases have been established in Donetsk, Horlivka, and Debaltseve. We observed the movement of command and staff vehicles, mobile radio stations, and a concentration of military equipment, supplies, and personnel in several areas of these settlements.