Nadiya Savchenko’s response to Ukraine’s Security Service Chief: Stay out of it! #FreeSavchenko

Nadiya Savchenko
04.24.2015
Translated and edited by Voices of Ukraine

[Editor’s Note: This is Nadiya Savchenko’s letter in response to statements made by Vasyl Vovk, the head of the Chief Investigative Office of the Security Service of Ukraine. On April 23, 2015, Vovk claimed that Savchenko’s defense team was interested in her long-lasting arrest because their PR was more important than Nadiya’s fate.]

I live my life using my own judgment. If I am dissatisfied with my attorneys, I will discharge them myself.

But I have complete trust in my defense team! And I fully support our line of defense. I am wholly satisfied with the qualifications, methods, and sincere intentions of Mark Feygin, Nikolay Polozov, and Ilya Novikov.

I ask that you keep your nose out of my business, since you are unable and unwilling to provide me with [legal] defense. At the same time, you are preventing others from doing it! You have no moral right to talk about me in the first place!!!

I also have a question for you: if you graduated from a Russian university in  Soviet times, if you were a government official and held prominent positions under Yanukovych [ousted Ukrainian president], then what are you still doing as part of the [new Ukrainian] government? Where is our lustration [team]? Isn’t it high time for you to retire?

I would also warn you against conspiring to somehow harm me after this address, to revenge your hurt ego. 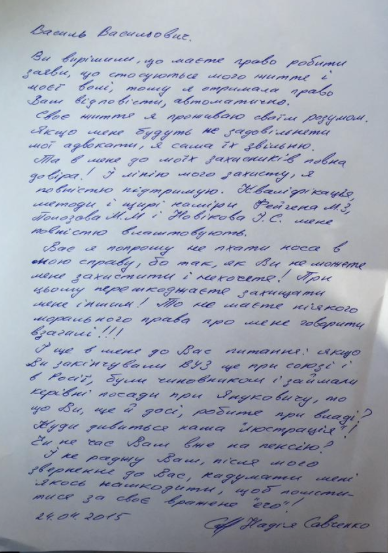 3 Responses to Nadiya Savchenko’s response to Ukraine’s Security Service Chief: Stay out of it! #FreeSavchenko