Dmitry Tymchuk, Head of the Center for Military and Political Research, Coordinator of the Information Resistance group, Member of Parliament (People’s Front)
04.14.2015
Translated and edited by Voices of Ukraine

Russian-terrorist forces in Donbas continue to fire at the positions of Ukrainian troops and civilian objects; besides actively using small arms, they are using weapons systems that were supposed to be withdrawn from the demarcation line in accordance with the Minsk agreements. In particular, during April 12-13 (within 48 hours) terrorist used 20-mm mortars, 122-mm artillery (D-30 howitzers and ACS 2S1 “Carnation”), armored vehicles (T-72BA and T-64B tanks, as well as AFVs – BMP-2, BTR-80) in attacks and armed provocations. In addition, heavy anti-personnel and anti-tank grenade launchers (AGS-17, SPG-9), heavy machine guns and anti-aircraft guns (ZU-23-2) were used. 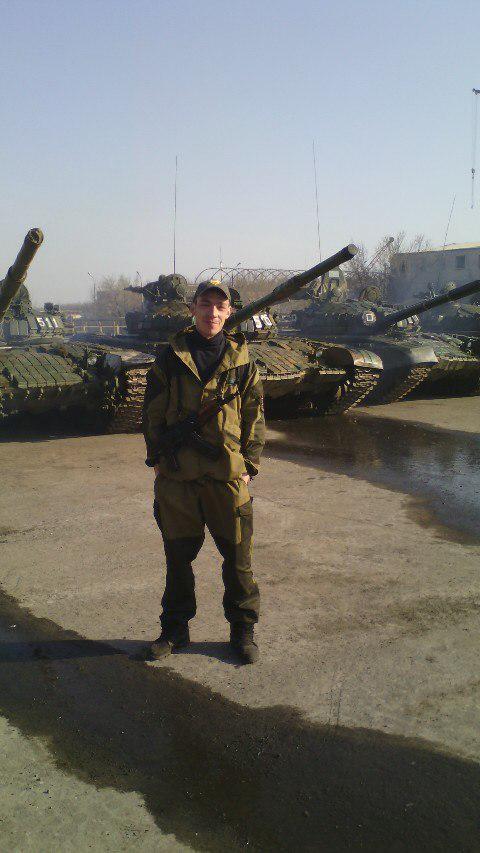 Russian tanks in Luhansk on the “Transpele” base. SOURCE

In the Luhansk direction, a sharp intensification of reconnaissance activities by insurgents has been observed. In particular, during the last two days at least 11 insurgent drone flights have been recorded near the settlements of Krymske, Novotoshkivka, Shchastya, Triokhizbenka, Sokolniki. Also, an enemy drone has been observed northeast of Severodonetsk (in the vicinity of Starobelsk). At the moment, it is currently unknown from which direction this “drone” was launched (from the occupied zone or from the territory of the Russian Federation across the state border). Terrorist sabotage and reconnaissance groups made, at minimum, 4 attempts to penetrate into the depth of tactical combat formations of Ukrainian troops in areas in the Severodonetsk direction, and once – near the settlement of Shchastya.

On the night of April 12 and April 13, “wandering” terrorists tanks attacked the positions of Ukrainian troops near the settlements of Pisky and Vodyane (previously these positions were fired on by insurgent BMP-2 with 30-mm automatic cannons, a firing group worked from 3 BMP-2s). Judging by the accuracy and range of fire, insurgents used the T-72BA with new Russian “night” scopes; a tank T-64B and Zu-23-2 system covered their advancement to the firing position and further movement with fire.

On April 13, terrorists repeatedly inflicted mortar strikes at the positions of Ukrainian troops in the vicinity of Pisky (including 120-mm mortars), Avdiivka, Shyrokyne, Hranitne, Opytne, and a Dutovka mine (the use of BMP-2 and BTR-80 has been recorded).

Near the village of Donetskyi (in Luhansk direction) tactical groups of Russian-terrorist forces tried to infiltrate deep into the battle formations of Ukrainian troops. An enemy firing group, using small arms and grenade launchers, tried to cover the passage of another group butting between the positions of two Ukrainian units. However, the advancement of this group was uncovered by Ukrainian soldiers, after which they opened fire and stopped the group’s advancement deep into our combat formations, after which two groups of insurgents retreated to their original line of starting.

During April 12-13, the movement of 33 vehicles as part of supply convoys for Russian-terrorist formations has been observed. Convoys predominantly took the “northern” route (24 vehicles passed through Alchevsk and Krasnyi Luch towards Debaltseve). Noteworthy is a significant number of specialized vehicles in the convoy (at least 1/3) and vehicles with special block sections with various equipment. There has also been a significant reduction in the number of fuel tankers in convoys.

Regarding the movement of units and military equipment of Russian-terrorist troops:

– The terrorists continue transferring armored vehicles through Luhansk and further, along the insurgent-controlled section of the Bakhmut highway, towards the positions of the Ukrainian troops near Novotoshkivka, Krymske, and Trokhizbenka. Over the last two days, the insurgents transported 7 armored vehicles in this fashion (at first, two tanks and two BMP-1 infantry fighting vehicles, then another two tanks and one BTR-80 armored personnel carrier), as well as 12 transport vehicles (including 3 fuel tankers). It should be noted that insurgents in the vicinity of Novotoshkivka and checkpoint N29 are actively using specialized equipment to construct fortifications (possibly, for show).

– The terrorists continue concentrating personnel and combat equipment in the area of Dokuchajevsk – Telmanove. New positions were set up behind Starobesheve, in the direction of Nova Laspa and Dokuchajevsk. Over the last 24 hours, a total of 6 ACVs (mainly MT-LB with Shturm-S anti-tank missile systems), 6 tanks (from the tank company that is part of the BTG deployed southwest of Dokuchajevsk, as earlier reported by the IR group), and many vehicles were transferred to this area.

– Another shipment of armored vehicles arrived to join the Yasynuvata group of Russian-terrorist troops (4 tanks and 6 ACVs).

– The terrorists transferred 2 tanks, which had undergone repairs, to the Kyivskyi District of Donetsk.

– An insurgent unit on board of four BTR-80 APCs and 3 trucks moved in the direction of Horlivka through Yenakijeve (according to the preliminary data, the trucks were used to carry modernized Russian anti-tank missile systems; we are currently clarifying the type).

– During the night of April 12-13th, a convoy of combat equipment passed along the “southern” route (through Snizhne – Shakhtarsk – Zuhres). According to our preliminary data, it was used to transfer part of a TOR-M1 anti-aircraft battery.