Dmitry Tymchuk, Head of the Center for Military and Political Research, Coordinator of the Information Resistance group, Member of Parliament (People’s Front)
04.09.2015
Translated and edited by Voices of Ukraine

During the last 24 hours, increased activity by Russian-terrorist forces has been observed in the ATO zone.

In addition to multiple attacks in different parts of the demarcation line, insurgents have carried out limited tactical offensives on one stretch (in the Luhansk region) in the vicinity of the Bakhmut highway, attacking the advanced positions of Ukrainian troops. For half an hour, Ukrainian soldiers engaged in a close firefight with an attacking enemy infantry team (up to a company in size), which was supported by several armored vehicles (4 vehicles operated near the positions of the ATO forces, one of which was a tank; 5 more armored vehicles supported insurgent infantry with heavy fire from the inside of their military formations). As a result of combat, insurgents were pushed back to the starting line.

In the vicinity of ​​Bolotene [Luhansk region], insurgents attacked positions of Ukrainian troops with mortar fire. In Donetsk region, positions of Ukrainian troops near the settlements of Novosilka, Opytne, Avdiivka, Berdyanske came under the mortar fire of terrorists. During all of the attacks, Russian-terrorist forces mainly used 120-mm mortars that have been allegedly “moved away” [from the area. Ed. note: as per Minsk II agreement]. The enemy combined mortar fire with other heavy infantry weapons – heavy machine guns, heavy grenade launchers, and small arms.

In the vicinity of Hranytne (south of Donetsk) a mobile firing group of terrorists, armed with anti-tank systems, ambushed and tried to destroy several armored units of the ATO forces. However, launches of anti-tank guided missiles from an earlier established firing position were unsuccessful for the insurgents – none of the anti-tank missiles hit the target.

Russian-terrorist forces continue to carry out the regrouping of their troops. In particular, a tank tactical group previously recorded by the IR group to be on the march (moving through Luhansk) came out at the Pervomaisk–Stakhanov direction, some tanks (7 vehicles) left towards Horlivka. Following the tank convoy on the same day, 11 liquid bulk tank truck tankers and 4 specialized vehicles (mobile machine army shops) proceeded along the same route.

A company tactical group of insurgents concentrated near Starobesheve, previously reported by the IR group, began to advance towards the front (west and north-west of Telmanove, possibly advancing towards Dokuchajevsk).

Reinforcements continue to arrive in the vicinity of Novoazovsk – Oktyabr – Bezimenne for gangs that are waging heavy fighting with Ukrainian troops on the Shyrokyne – Chermalyk stretch. A sharp decline in the number of reinforcements for Russian mercenaries has been observed, the majority of them – are local “DNR” insurgents (Russian mercenaries are observed mainly as part of the crews for the military equipment transferred from Russia). At the moment, 550-600 people have been transferred as reinforcements into the area.

Besides combat activity, Russian-terrorist forces continue to actively increase combat readiness of their formations and carry out mobilization activities.

The system of repair and maintenance of military equipment and means of insurgent transportation have been practically finalized on the occupied territory. If last year the share of returned military equipment that was previously out of order was estimated by the IR group at not more than 5-7%, today, the share has reached a rate of 25-30%.

Also, works to increase the capacity of major railroad and automobile communications controlled by the occupiers have been observed, to transfer weapons and  material and technical resources from Russia.

During the past 24 hours, a sharp increase in the number of supply convoys has been observed – overall, movement of 44 vehicles (mostly through the “northern” route, a significant number of vehicles was recorded on the Krasnyi Luch – Debaltseve stretch (21 vehicles in two convoys), and between Alchevsk and Stakhanov (13 army trucks, also in two convoys). 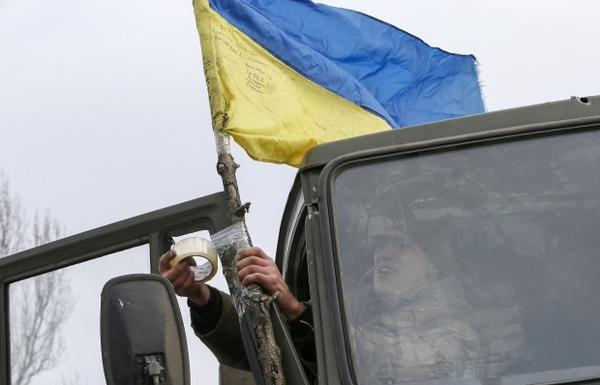