Dmitry Tymchuk, Head of the Center for Military and Political Research, Coordinator of the Information Resistance group, Member of Parliament (People’s Front)
03.17.2015
Translated and edited by Voices of Ukraine

Destroyed building of the Donetsk Agroindustrial Institute in Pisky. Photographs by Docutoloka

The ‘armies’ of the ‘DNR’ [Donetsk People’s Republic] and the ‘LNR’ [Luhansk People’s Republic] continue reinforcing their combat capacity. The Russian-terrorist command strives to balance the strength and structure of their units in each particular sector with assigned tasks [for each sector]. The troops’ command and control systems are [also being] perfected.

Another ‘training center’ for the ‘refresher training’ of local insurgents and mercenaries arriving from Russia has been created in the vicinity of Krasnyi Luch.

As of this time, about 6,000 troops belonging to different Russian-terrorist formations are assembled on the Horlivka – Yenakijeve – Debaltseve stretch (the “Horlivska Garrison” that is part of “Oplot” gang, and several smaller units, including “Vostok” and “Somali”). This group in particular employs powerful and long-range weapons that operate in the base area (9K58 “Smerch” multiple rocket launcher systems, as well as cannon and self-propelled artillery). In most cases, the munitions are “withdrawn” to positions from where it would take them less than 60 minutes to return to their previous principal firing positions near the “front line.” Additionally, up to 60 tanks are mobilized on the stretch between Krasnohorivka and the northern outskirts of Horlivka (T-64 of various modifications, as well as the T-72 equipped with new types of ammunition and equipment allowing long-range and night-time combat), at least 95 different ACVs (armored combat vehicles, mainly BTR-80 and BMP-2, and several BTR-82). Also deployed in the area are a ​​logistics facility and an air defense system (3 radars, as well as many firing units that provide air defense, including directly at the “front line”). 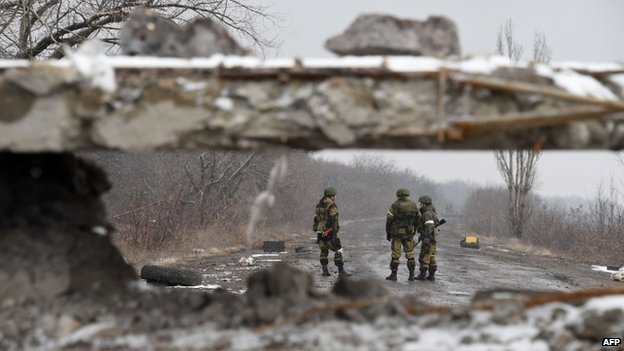 In the seaside (Mariupol) sector, a strike group of Russian-terrorist troops is structuring. Some of its manpower and resources have been moved forward, directly to the line of contact with Ukrainian troops. This strike group receives periodic supplies of military equipment and its maintenance specialists from Russia. Another “mobile” armored group has emerged at the “front line” (6 tanks, 5 ACVs, and two ZU-23-2 systems supported by a mortar battery).

In the Donetsk sector, terrorists are persevering in their attempts to “probe” the front edge of the Ukrainian defenses, through heavy shelling, extensive use of intelligence equipment, and attempts of sabotage and reconnaissance groups to infiltrate deep inside the ATO forces combat formations. Up to 3,000 insurgents and Russian mercenaries are currently concentrated on the stretch between Marinka and Krasnohorivka, as well as 27 tanks (divided into groups of 3 or 4), and 36 AFVs.

Over the past 24 hours, we observed regular deliveries of resources and supplies from the Russian Federation (most of them via the “northern route,” by motor transport and railway). Overall, 6 train cars and 12 covered platforms arrived in Ilovaisk (presumably carrying MRLS, and command and control vehicles). About 40 vehicles and 12 combat vehicles (mainly ACVs) were seen moving through Luhansk and Krasnodon as part of supply convoys. Convoys arriving from Russia typically include a large number of specialized equipment – transport-loading vehicles, fuel tankers, and engineering machinery and equipment (cranes, tracklayers, etc.). The greatest number of deliveries of supplies and technical resources in the last few days were made to the Luhansk sector and the Artemivsk–Donetsk stretch.

Insurgents continue to move coal [from Donbas] to Russia. On average, we have reports of 10-12 heavy cargo trucks with coal leaving from the Luhansk oblast for Russia daily. Documents accompanying the cargo define the shipments as “coal from Ukraine,” and the Russian customs service is observing all customs formalities.

In Luhansk and several other settlements in the territory controlled by the ‘LNR,’ insurgents are persistently spreading rumors about an impending massive air strike by Ukrainian aviation, supposedly scheduled for March 17. The motives behind the spreading of this rumor are currently unknown.