Myroslav Marynovych, speaking at the ceremony of the Truman–Reagan Award,
Washington DC, June 11, 2014 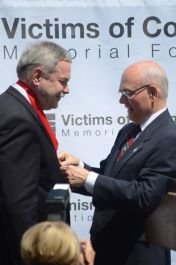 First of all let me thank once again, in your presence, the Victims of Communism Memorial Foundation for awarding me the Truman–Reagan Medal of Freedom.  It’s a true honor for me and for many of my fellow Ukrainians.

Let me further develop some ideas expressed during my earlier Acceptance speech.

As you already know, I had been a prisoner of conscience (as Amnesty International puts it), imprisoned from 1977 to 1987 for human rights activities in the former Soviet Union.  The time in the Soviet GULAG happened to be the most difficult, but, at the same time, the most spiritually rewarding in my life.