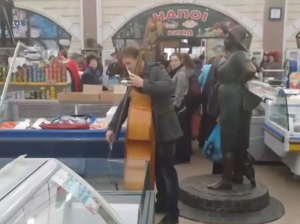 Conductor of the Odesa Philharmonic Orchestra Hobart Earle, along with musicians and singers, sneaked into the fish rows of Odesa’s legendary Privoz market and staged a musical flash mob. The musicians performed ‘Ode to Joy’ by Ludwig van Beethoven, which is the anthem of the European Union since 1993. The musicians wanted to express their protest of conflicts and support Ukraine’s unity, so they selected a song with a text dedicated to unity and brotherhood.