The Military Absurd and The Victory of the Spirit: Maidan Transformed from Feb. 18-20 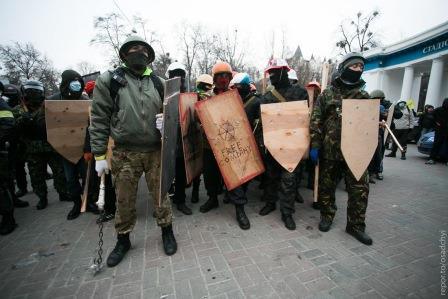 Self-Defense units and their “armor”

Svetlana Yakovleva via Facebook
25/02/2014 23:12
Translated by Anna Danilova
Edited by Maria Stanislav
Edits and Visuals by Isis Wisdom
Source: https://www.facebook.com/svetayy/posts/639000032831951
I’m in tears, and I’m proud that Ukraine has such HEROES…
From a post by Dzvinka Kalynets-Mamchuk (who was also at Maidan that night) 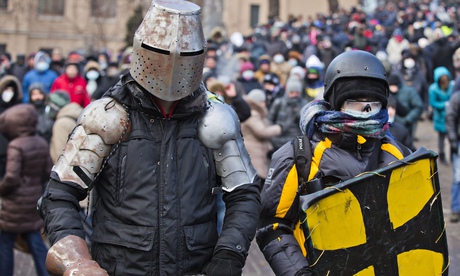 Alexey Arestovich:
“You know, for the professional military community, all this ‘self-defense,’ made up of children and managers who donned motorcycle helmets, that was, how should I put it… ridiculous.

No serious man, except maybe a few, would be staying in a tent at Maidan, with all these watches and walking in ranks. That’s unacceptable.

Not to mention that waving a stick while waving a helmet, that’s just not done.

Not to mention that serious people have serious business, and they can’t dump it just like that, because of, you know, responsibilities.

So, all in all, that community was amused. Until February 18th. The beating in Mariyinskiy Park and the night assault wiped the smiles right off their faces.

In the morning of 19th, I started getting messages. First, from Israel (people who went through wars in Lebanon, the Intifada, and more special operations):
“Stupid children, what are they sticking their heads into?! Did they play too many computer games?..”

A little later, the English:
“What fool gave them such orders?! Wooden shields – against sniper rifles and Kalashnikovs?”

That one I had an answer to.
“Look at their movements. You can clearly see it’s volunteer action, not people following orders.”
“You know, you’re right…”

And later still…
“What are they doing this for? It’s stupid, foolish, illogical.”
At the time, I didn’t understand yet, myself – what for, indeed?..

Then I understood.
“They’re drawing the fire, to themselves – away from the women, medics, old people, civilians at Maidan.”
“At this cost?!”
“Yes, at this cost.”

After that, there was only silence.

I was told on a whisper, from the other side, that even the shooters were shaken up by these “ridiculous boys,” who kept going forward, again and again, even after they saw a group just like them being shot down.

In fact, we cannot fully imagine, what would have happened if the people at Maidan, both dead and alive, had wavered and fled that day. Furious crowds of Berkut and “titushkas” would’ve spread all over the city, to kill, plunder, and rape, and the country would have been plunged into total chaos, compared to which Belarus and Russia would look like child’s play.

But all those people, both the fallen and the survivors, served to close a terrible vortex, and ruined the plans of both Putin and the devil himself.

And here’s your dilemma: it’s totally absurd from a military point of view, but an immense courage of conscience and a tremendous victory of the spirit. Truly tremendous!

Like Loading...
This entry was posted in "Voices" in English, Voices of Revolution and tagged #Євромайдан, #евромайдан, #Human_Rights, #революціягідності, #ukraineprotests, #ukrainian_revolution, #whitehouse. Bookmark the permalink.

1 Response to The Military Absurd and The Victory of the Spirit: Maidan Transformed from Feb. 18-20